Hit Me With Your Best Shot: Mary Poppins

I had never seen Mary Poppins before today. This somewhat startling fact had become more or less a running gag with certain friends since they just could not fathom why I hadn't seen it and why I had no desire to do so. I was the same with The Sound of Music until I came across it one day on television and figured "it's now or never." My experience with watching that famous 1965 Julie Andrews musical only made my desire to not watch Mary Poppins from one year earlier even stronger. Still, bite the bullet I did and I watched Robert Stevenson's 1964 musical for the first time for The Film Experience's ongoing "Hit Me With Your Best Shot" series.

I'll admit that for as much as I struggled to watch the movie its seemingly interminable series of pantomime and cloying wide-eyed quirkiness, I struggled even more to find a shot that I liked enough. I don't feel Mary Poppins is a particularly well-photographed film. Oh, sure, the sets and the costumes and the animation and the visual effects are all working overtime to make this a lively and energetic picture (there is always a lot going on in nearly every frame), but I don't think the cinematography do it any favours with its unimaginative set-ups and framing. I didn't find many of the musical sequences all that involving and only when they really ramped up the artificiality did I actually get invested in them, which is a curious thing to admit but there you go.

I guess that brings me back to why I just flat out did not like this movie. It feels so crushingly old-fashioned. Consider that West Side Story had come out just three years prior and maybe you can see what I mean. That one is so vibrantly constructed and beats with a modern heart. Mary Poppins, for all of its technological advances, just reeks of mothballs. I know many consider the film to be a lighter than air confection, but I found its dottering and fluttering to be nigh on insufferable. I mean, it certainly doesn't help that Julie Andrews is the only one I could stand to listen to - it's undeniable that she has a pretty voice, yes - but I really struggled to watch this movie without sighing every time an unnecessary song that goes on far too long came on. Cutesy kids alert at red, folks. Eep! 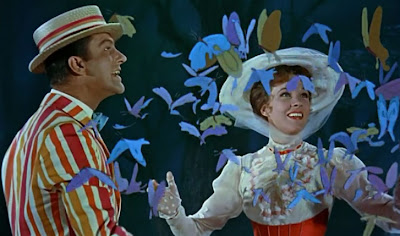 The one aspect other than Andrews that I enjoyed was just how very odd the whole enterprise is. I don't just mean in that characters go about doing odd things, but that the film itself finds itself throwing some truly odd stuff out there in what was probably conceived as a rather innocuous children's flick (upcoming Saving Mr Banks will certainly show us what's what, right? Ummm... maybe not). When it came to selecting a shot I considered the moment the flowers become butterflies in the famous animated sequence (above), or something from Dick Van Dyke's rooftop dancing sequence with the fireworks since there was some beautiful matte work there, or his foggy exit, or even one of the ridiculous shots of nanny's flying away down the street (did nobody find that odd?) No, my "best shot" is one actually from the very beginning of the movie as the camera pans across the London skies and spots Mary Poppins sitting atop the clouds. I found it quite odd, but that's a good thing. 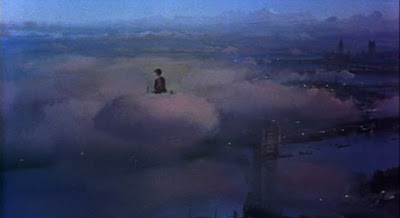 It's a moment that genuinely surprised me. And for a film that didn't do all that much surprising to me in its following two hours and twenty minutes, I figured that was worth celebrating. It's just a supremely strange moment that comes unexpectedly and comes rather peacefully, uncluttered by everything including the kitchen sink that the rest of the film seems determined to throw at the screen. Looking at it just now and it's a rather beautiful image in its own right, and one that looks as if it carries a certain sadness without its cheerful chim-chim-cheree on the soundtrack. I wish the rest of the film was able to make me actually feel something other than painful contempt. I am not surprised in the least that the creator of the Mary Poppins character hated the film.

If you ask me, the best thing this film wrought was the infamous "Scary Mary" recut trailer that reposits the film as an suspenceful horror flick about a vengeful nanny with mystical powers. I'd long enjoyed the video, but now having seen the movie it's based on I can guarantee that it'd be a helluva lot more interesting. Especially since, as the video suggests as well as the aforementioned odd moments, there's a completely different movie going on in there and I want to see it.

I can understand your points here, however I will urge you to look a bit more into the history of Mary Poppins and her author P L Travers. A lot of everything is going to be explained in Saving Mr Banks.
The point is, it took 30 years for Travers to release the rights to Disney for Mary Poppins, and thank god too. I don't think they would've done as half a good job of it if it were made any earlier. One of the conditions for the release was that Travers had full script approval, something unheard of in those days considering other authors just allowed Disney to work his magic, so to speak, no strings attached. So you have to understand that the run time of over 2 hours was deemed necessary.
The comparison with West Side Story is an interesting one. I find both films visually fascinating. They both use colour to dramatic effect well, however you've criticised Mary Poppins in "reeking of mothballs" which seems a little harsh. The settings are completely different and in being in Edwardian England compared with a modern (at the time) New York City, there must be allowances.
The biggest point is how odd and fluttering the film seems. If you read the books, you'll find that Mary Poppins adventures with the children do jump around some, as the film does. Disney took several of those short adventures and molded them into the underlying storyline, which is the transformation arc of Mr Banks. While not obvious, the subtle hints are there. Everytime the children recount their adventure of the day, their father takes a little from it, culminating in his use of superfragilisticexpialidocious, and the wooden leg named smith joke in his disciplinary hearing. Thus his realisation of how much he has neglected his children comes into play, and he transforms into a loving father.
While the film seems very all-over the place, knowing and watching it thoroughly brings an appreciation for what Disney was trying to achieve throughout this film. It is visually engaging, entertaining, with an underlying message. Something I find modern films are lacking in, considering the need for everything to be explained. Must we know why Mary Poppins is magic, or what she does on her second tuesday off? It seems to be enough for me at least, that there is hope that life can take a completely new direction, upon meeting a new and unfathomable stranger.