Cinema of the Absurd: Staying Alive 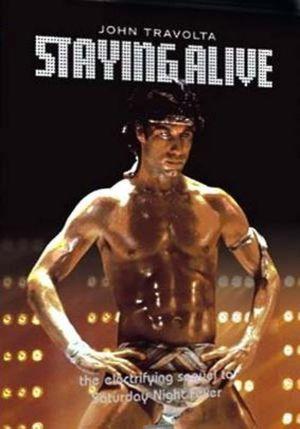 Three words come to mind when I think of Sylvester Stallone's apparent sequel to Saturday Night Fever - Preposterous, leotards and masturbatory. Obviously amongst others descriptors such as 'poorly acted', 'awkwardly choreographed' and 'eye-buggingly hilarious'.

Plot: Tony Manero (John Travolta) is now a down-on-his-luck Broadway-wannabe dating Jackie (Cynthia Rhodes) another dancer who has a chorus role in a production starring the (I think) Russian superstar Laura (no last name provided) played by soap-star Finola Hughes. All three eventually land roles in a hot new musical called "Satan's Alley". Tony happens to become the lead because the director has a hunch that he's better than the man who's starred in 6 Broadway shows (or whatever) and soon enough Tony is torn even more. Then comes the oh-so-hard decision of "To wear clothes, or not to wear clothes". Frivolity ensues. Let's discuss. 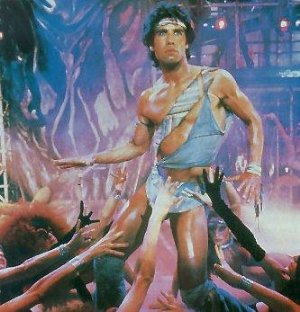 Proposterous - Everything about this movie fits this description. How could any movie be this cliched? Well, I'm not entirely sure, but director, co-writer and co-producer Sylvester Stallone (!!!) sure did manage to make it happen. The films opens with a ridiculous Broadway audition. Ridiculous because it shamelessly steams from a Broadway-set musical that was made four years prior - All That Jazz. The first thing I actually noticed though was John Travolta's hair. I know it was the '80s, but John's hair is approaching massive scales here. I'm fairly certain the amount of hair sprays used on this film are at least partially responsible for the hole in the Ozone Layer.

One of my biggest pet peeves about movie musicals that have production numbers set on a stage is when they forget that apparently there are people actually sitting in a theatre watching it occur in front of their eyes without the added extra of camera angles, edits and effects. My only fault with Lloyd Bacon's 1933 musical 42nd Street is apparently the big production number at the end is being performed infront of an audience, yet the film's most famous shot is of a camera moving through the legs of a chorus of leggy female dancers and meeting our loving couple at the end. The shot is amazing and looks great, however, if you were in the audience it would merely be some dancers standing on a stage with two people lying on the stage at the end of it. And don't even mention the fact that the musical appears to only be 15 minutes long (I know they can't show the entire production, but at least make it appear as if stuff is missing).

Now, that brings me back to Staying Alive and the preposterous production number that concludes the film. Now, I always thought Broadway musicals had dancing AND singing, not just dancing - but maybe the '80s were different? Anyway, watching the 10-15minute cut of the production we see at the end of this film is like watching some unholy freak light show at a bondage orgy. We don't have any idea as to what Tony's character is supposed to be, or even where he is (we know he's in Hell because we've been told earlier in the movie). Finola Hughes' portrayal of the Devil is assumed simply because of the red leotard she is wearing. Add to that camera angles and dance moves that the audience wouldn't be able to see and it was just so weird watching it. And add to that the fact that THE LEAD OF AN EXPENSIVE BROADWAY PRODUCTION DECIDES TO IMPROVISE A DANCE SOLO RIGHT BEFORE THE BIG FINALE! At that stage I just couldn't stop laughing. And then to top it all off, the characters start to talk to one another while on stage. It's all so hilariously stupid that you sort of need to laugh. 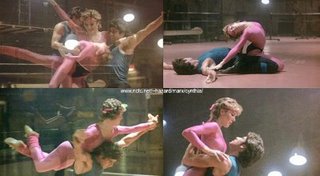 Leotards - Aah, leotards. Apart from Madonna, has anyone ever looked good in a leotard? It doesn't help that every. single. one. is. ugly. My favourite (ie; the ugliest) was this disgusting yellow... thing that Finola Hughes wears in rehearsal. It. Was. Grotesque. One of the film's funniest scenes (seen above) is when Cynthia's Jackie gets dropped off at the rehearsal theatre by her date and meets Tony. Tony asks her if they can rehearse the dance number, she says sure, and then proceeds to take her coat off to reveal a tight pink leotard! If you were a horny dancer (which they all are apparently) and were going on a date would you WEAR YOUR LEOTARD?! And a full-body one at that. I must say though, I was tres pleased to see Jackie wearing LEG WARMERS. They had been suspiciously absent from the movie until that point. 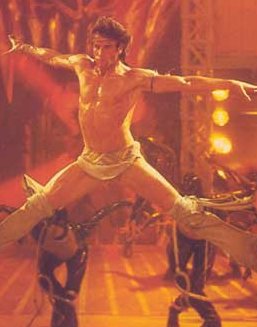 Mastabatory - As far as I know, Sylvester Stallone isn't gay. I am positive he wasn't pulling a Victor Salva and turning his movie into soft-core gay porn, but just LOOK at that poster at the top. that was the first image of the movie people would see. And trust me it ain't a pretty site in the movie either. It's all quite ridiculous watching Travolta prance around trying to look all manly and macho with his black singlet top and dripping with sweat. It's all very strange watching John writhe around on stage looking like an over-worked gigolo, but that's what it's like. 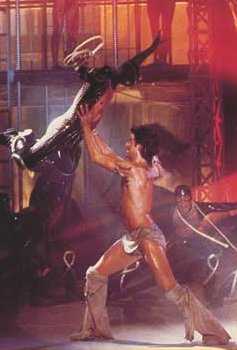 Conclusion - Really though, Staying Alive needs to be seen to be believed. It is utterly ridiculous, ludicrous and silly. How did Stallone and co think people were going to buy into this as serious material? Luckily for us, we can look upon it today as the absurdity it is and look at it fondly. I appreciate this movie for providing so much. Not many other movies can claim to not destroy the career of two up-and-comers (1983 was the beginning of John Travolta's first decent into over-the-hilldom and Cynthia Rhodes' career never took off because of it too) and one director (after 1985's Rocky IV Stallone never directed again until this year's newest Rocky sequel) and I'm sure The BeeGees, leotard manufacturers, Broadway producers and any other film that had dance in them were negatively effected because of it. All in all though, Staying Alive is a hoot and a half.

On the Absurdity scale from 1-5, I rate Staying Alive a 4.5
It's pretty fuckin' absurd!

Posted by Glenn Dunks at 7:25 AM No comments: