Cinema of the Absurd: Glitter 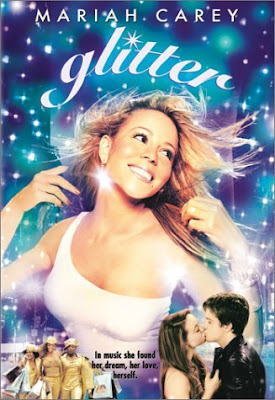 Plot: It's A Star Is Born meets Dreamgirls, folks! Upon receiving a very harsh lesson from her boozy drug-addicted lounge-singing black mother about the realities of falling asleep with a lit cigarette in her hand (their house burns down!) young impressionable mixed-race Billie Frank gets shipped off to a really fancy New York City orphanage (along with her pet cat, Whiskers - keep a note of that folks!) and instantly becomes friends with a Puerto Rican and a sassy African American chick. "I'm mixed!" she proclaims. Many years later, working as a dancer at a nightclub, she is discovered by a DJ named Dice who quickly turns her from a poor down on her luck hoochie mama to a world-famous singer with a performance at Madison Square Garden. In between there are fights, telepathy, shootings, weight issues and, PG-rated epiphanies. 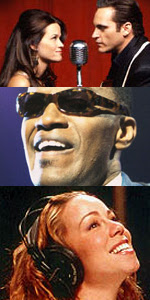 Ray, Johnny, Bob, Mariah: Ray Charles and Johnny Cash both got biopics made about them in recent years 2004 and 2005 respectively, while a biopic about Bob Dylan comes out this year as well. But, really, Glitter is a biopic about Mariah Carey and it was released in 2001 so it was ahead of it's time. Let's not pretend here, if this isn't a slightly falsified biopic on the glass-breaking pop star then I don't know what is. From the main character of Billie Frank (Mariah Carey) being half black and half white (which according to a music video director makes her "exotic!" to the meltdown Billie has with her record company. Except in Billie's case it all happens within the span of about 3 weeks in the 1980s, whereas Carey's career has been going since 1990's debut album Mariah Carey.

Irony? Why never!: Oh, Billie! One of the greatest scenes in Glitter is on the set of her first music video. It is Carey's finest acting moment. She, hilariously and without the slightest hint of irony, makes her character of Billie incredible shy when she's asked to writhe around in a bikini on the set. Carey's range of emotions go from 'Looking at my feet, nervously' to 'why are these greased up muscle men groping me'. It's an amazing moment of film. So powerful! So raw! But, the main reason this scene is the greatest filming-scene-within-a-film is because of the following quote from the video's director:

Is she black? Is she white? We don't care - She's EXOTIC! I want to see more of her breasts.

Woody Allen, Tennessee Williams and Ernest Lehman couldn't come up with dialogue that amazing if they tried!

Wise Wisdom: Glitter is full of wise words of wordy wisdom. It portrays the 1980s music world so realistically (no drugs or sex or people wearing shoulder pads!) that I feel like it's just bursting out from the screen. Take for instance the concert at the end of the film. The character of Billie Frank has somehow managed to sell out a concert at New York's Madison Square Garden on the back of one single. We are told that Frank's song "Didn't Mean To Turn You On" (aka, Mariah Carey's song "Didn't Mean To Turn You On", clip below) was #1 for ten weeks (yet she still needs a track that will "cross over"?) yet an entire plot strand revolves around how the record company doesn't like the album DJ Dice (her lover and producer) has made so they get her to make a new one. So, yes, apparently in 1980s dance artists could sell out entire stadiums on the back of one song.

I believe it, don't you?

Milli Vanilli, #1 With a Bullet: The character of DJ Dice (played with hilarious ineptitude by Max Beesley, sort of an even skeevier version of Stephen Dorff) is one of many contrasting facets. On one hand he loves Mariah Billie, yet on the other hand he's a jealous overbearing man with anger management problems. Not a cliche at all! 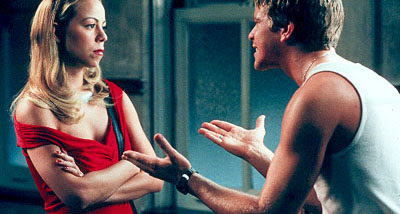 He and Billie share a unique connection though: The connection of telepathy. In what is, quite frankly, the most genius movie scene of all time Dice and Billie - on opposite sides of the city - write a song together. He writes the melody, she writes the lyrics. Only later when she breaks into his house and finds the sheet music does she realise that they are meant to be together.

*sniff* There's a moment in the ultimate absurdity Showgirls where actress Elizabeth Berkley registers her emense sadness by a single solid *sniff*. It's the funniest moment in cinema history. Carey herself has an equally emotion-wringing moment in the film. Upon a visit to family services to see if they know where her long lost drug-addled boozy chanteuse. She is told that, shockingly, they don't follow the every step of people who lose custody of their kids. This scene gives Carey her greatest challange and the results are funny. The blank stare that tears through the screen and chokes the tears out of you. Tearjerkers don't come any better than this. Billie's eyes are dead. DEAD!

Another moment of immense tragedy that registers with Billie to the result of dead eyes is the word that, omigod, Dice has been shot and killed on the night of her (totally believable) performance at Madison Square Garden. Like the trooper that she is still goes out on stage and performs her heart out of "Never to Far". Think Barbara Streisand singing "People" in Funny Girl. Liza Minnelli singing "Life is a Cabaret" at the end of of Cabaret. Think Jennifer Hudson's rendition of "And I Am Telling You I'm Not Going" from Dreamgirls. Think Kelly Clarkson singing "That's The Way I Like It" in From Justin to Kelly.

Stars Cats and Stripes: Two of the oddest most perplexing (and thus, hilarious) aspects of Glitter are her cat Whiskers and the weird silver striping that appears all over her body. First of all, we see Whiskers twice throughout the film. Once at the start when Billie is just a little kid and then years later when Billie is 18 24 30 whatever age she is after she's hit the big time. Whiskers is such a well-behaved cat that Billie can seemingly walk all across town (New York City remember) holding Whiskers and he doesn't even move! Talk about commitment to your craft. That cat deserved an Oscar. 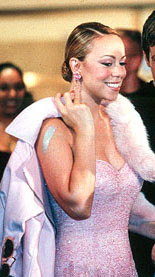 Even the biggest of Glitter's fans though can't explain the mysterious silver stripes all over her body. They first appear on her face early in the movie like some camp Bootcamp makeup. Then throughout the series of events we see the silver stripes appear on her arms and her lower back. The picture to your left is from a scene around the middle of the movie at the American Music Awards (where "Lional Ritchie won two!") The Mystery of the Silver Stripe ranks right up there with the ghost behind the curtain in Three Men and a Baby and the case of the suicidal munshkin in The Wizard of Oz. It will, most likely, never be solved.

Conclusion: Now, don't get me wrong, I am not saying that Glitter is anything other than ridiculous tosh. It doesn't transcend it's pure badness to become a masterpiece like, say, Showgirls. And it's not merely a perfectly adaquate movie with ridiculous aspects (such as other Cinema of the Absurd entries like How to Deal). No, but I think nearly six years after the fact (it was released the week after September 11) with Mariah Carey's looney breakdown and subsequent comeback in our minds, it is able to be looked upon as something other than "Mariah's Follies". 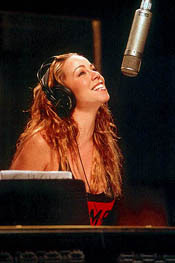 Every single decision that could have been made has been made poorly, which is why it's hilarious. For me, to give a movie a truly terrible grade, it must make me angry. Anger at the subject matter, angry at it being boring or something else like so much talent going to waste. Thing is - I can't tell whether there was any talent here in the first place, and so I prefer to view it as a bunch of absurd things happening for no reason as made by a bunch of people who don't actually know how to make a movie. It's everyone's fault that this movie is as incredibly ridiculous as it is. Glitter may be 100% stupid, but in my eyes it's never boring

PS; And I haven't even gone into why this is like some psuedo-Dreamgirls, just slightly "less black" (remember, Billie is mixed! Demonstrated during the scene where her black crack-addict mother needs money so she goes to visit the white well-to-do family man who impregnated her (See! This shit funn-ny! I can't make it up))

On the absurdity Scale of 1-5 I rate Glitter a 4.75. It's utterly unbelievable and almost inconceivable that so many untalented people were allowed in the same room long enough to actually make it. The thought of these clowns on set is almost as entertaining as the movie itself.

Below is the trailer for Glitter. The opening seconds sort of look like Mariah Carey's head is exloding.