Did you see that The Golden Girls was only ranked no. 69 on the WGA's list of the 101 best television series of all time? While there's some appropriate comic value to be found in a show as sexually liberated as The Golden Girls ranking at that position on the chart, there's also the glaringly obvious fact that it is insanely too low. As Blanche Devereaux would say...


I am assuming that since this is the WGA's list they are ranking their list in order of "best written" shows and not simply "best shows", although some of the other rankings make me think otherwise. Twin Peaks (no. 35) for as much as I covet it is surely more of a directorial achievement, especially given the second series' infamous descent into kooksville that happened once David Lynch more or less left the show for other projects. Likewise, how do shows like Dexter (no. 67) show up higher when it got dull from a writing perspective after only several seasons. And as much as I love Sex and the City (no. 39), like Modern Family (no. 34), and casually enjoy Everybody Love's Raymond (no. 63), I refuse to believe that any professional writer would hold them in higher esteem than the groundbreaking, uncharted, side-splitting laughs of The Golden Girls. Or, for that matter, the equally groundbreaking, uncharted, side-splitting laughs of Roseanne (no. 72), Murphy Brown (no. 74), and Absolutely Fabulous (no. 92). Apparently there are 68 series better written than this:

Of course, as per usual, the list is filled with titles that were initially met with lack of enthusiasm like The Wire (no. 9), Arrested Development (no. 16 - I wonder if that would be lower if they'd seen the much-maligned season 4?), Friday Night Lights (no. 23), and Battlestar Galactica (no. 38 - remember how it was only nominated for one WGA award in its five seasons, and Mary McDonnell never received a single Emmy, Golden Globe, or SAG nomination?) which isn't to say they don't deserve it (they certainly do; it's one of the benefits of lists), but that's the nature of art. They certainly deserve to be there more than, oh, The Good Wife (no. 50) and Downton Abbey (no. 43). And if you're going to freely acknowledge mainstream procedurals like House (no. 75), I don't see why The Closer couldn't find a ranking.


That little introduction ended up being far longer than I had expected. However, speaking of Blanche Devereaux (yes, this blog was originally meant to be about something else entirely and barely even related to that oh betwixt nightingale of a southern belle, but now can one resist going off on such a tangent?), I saw Jezebel this last weekend at MoMA and it's basically Blanche Devereaux: The Movie. 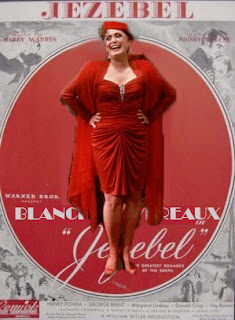 William Wyler's 1938 film hailed itself as "the greatest romance in the south", but then a year later Gone with the Wind came along so it didn't hold the mantle for too long. It doesn't help that, despite the incredible Bette Davis performance at its centre, the film isn't very good. It's a perfectly nice confection of hoop skirts, cotillion balls, and exaggerated emotions, but in the end it lacks the weight of another Davis romance, Now Voyager, or the aforementioned Gone with the Wind. It's the story of a woman who is strong-willed, unashamed in her womanhood, and rallies against societal norms like, er, wearing a red dress to a ball where unmarried women always wear white (I guess women didn't have all that much to scandalise with at the time) who then finds herself losing the man she loves due to her own stubbornness. Stupid woman, obvs lol!

I enjoyed Jezebel in fits and flourishes - I especially loved when Davis' Julie stands her ground against the potential of being hit with a can by her brash fiancée, or when Julie admits her wiser perception of the world with quotes like "I'm sorry, I forgot I'm a child. I'm not supposed to know about things like [red light district] Gallatan Street. I'm just supposed to flutter around in white," but then she will turn around and act like the very character she seems to be fighting against. 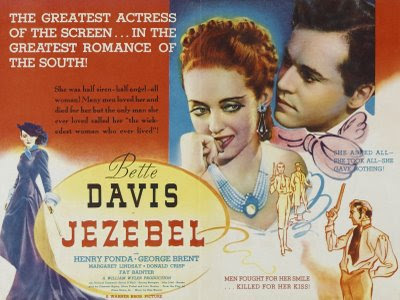 Still, apart from Bette Davis' Oscar-winning performance, the best thing about Jezebel are the humorous similarities between Julie and Blanche Devereaux as played by Rue McClanahan. All the odes to the old south and its traditions (hatin' on the Yankees and flitting between courting bachelors, basically) mingled with the feisty personality and sexually risque attitudes that are somewhat cover-ups for a more fragile personality.  Blanche is even called a "jezebel" (in comical, if derogatory fashion) several times throughout the series. It's all there. I like to imagine Blanche's mother was a fan of the movie and raised her daughters accordingly. Maybe, to quote one of my favourite lines from the '80s smash sitcom, "her mother was a slut, too." Much like the mountain due on the honeysuckle as the golden sun rises over the majestic Rocky Mountains and the Mississippi River, that bringer of energy and salvation, Blanche is a Jezebel loud and proud. Now, wouldn't Blanche Devereaux: The Movie make a much more entertaining enterprise? I think so.
Posted by Glenn at 8:00 AM