Cinema of the Absurd: The Black Dahlia 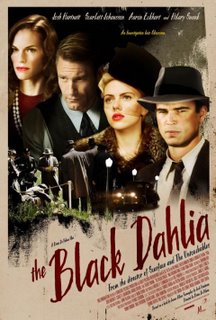 It’s been over a week now since I saw Brian De Palma’s The Black Dahlia and, as others have mentioned, it’s a very confounding picture. It’s not the type of movie you just sit down and whip up a few hundred or so words about off the cuff. It’s an incredibly strange creature of a film, if you can even call it a film. I mean, it has all the traits of a film – actors, sets, costumes, dialogue, etc – but I can’t possibly think of any movie it even slightly resembles. There are similarities between it and many others, but The Black Dahlia is a truly one-of-a-kind experience. It’s not a movie you should sit down to watch if you want coherence, acting or a clear resolution. No. It’s the sort of film you sit down to watch and just let it wash over you. Just dive head first into the wacky tobacky bong water that De Palma was clearly drinking on the set. 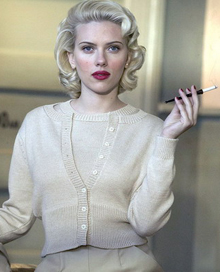 The Black Dahlia is a movie at seemingly complete odds with itself. Consider. On one hand it is so professionally tailored, yet nobody and nothing quite fits. The lead roles are all filled by hapless wolf in sheeps clothing actors yet the fringes are filled with electric, vibrant performances. De Palma has crafted many astonishing memorable sequences yet they seem more like jigsaw pieces just kind of floating around being placed anywhere at whim without any thought as to if they fit or not. The movie plays itself as the mystery surrounded the Black Dahlia herself yet at some times it feels as if De Palma (and screenwriter Josh Friedman, it must be noted) loses interest and just films whatever he wants cause the cast showed up to the set. On one hand the central mystery is such a mindbogglingly confusing maze, yet when it comes down to the murderer’s reveal it’s as if they just played eeny-meeny-miny-mo with the cast. 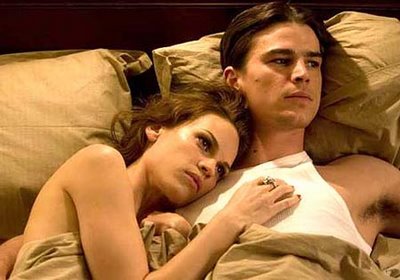 This movie really has no idea where it’s going until it realises the 2 hour mark is approaching and they have to end. Characters disappear because… well, we don’t know. They get throwaway lines alluding to a drug addictions or a deep dark secrets or such and such yet nothing is made from it. Scenes take place that lead nowhere. De Palma just gets bored half way through a scene and cuts to something else that he thought looked pretty. 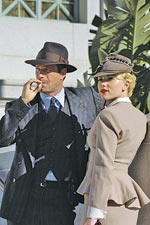 This is truly inept filmmaking. But, ya know what, it’s totally fascinating. I dare a hardcore cinephile to sit down and watch this movie and not find something positively riveting. Sure, when all is said and done, the movie is a wreck, but what a wreck. It’s hilarious. Watch as actors like Scarlett Johansson, Hilary Swank, Josh Hartnett and Aaron Eckhart play around in Mummy and Daddy’s clothes (even Eckhart, approaching 40 seems out of place). Swank puts on a curiously shapeshifting accent and wig. Johansson amps the cleavage up to 100 but drowns in all her cashmire and fur. The camp drag queen appearance skyrockets with it. Hartnett drowns in said accents, cleavage and cashmire. And Eckhart? Well… he plays his character as if he’s just been to a 1940s sleuth movie marathon and he decided to impersonate the lead actors to the nth degree.

People will compare it to LA Confidential and that movie was positively in the era. The Black Dahlia is sort of just transported into the area and the cast seem to be doing whatever they can to fit in. It’s sorta hilarious. 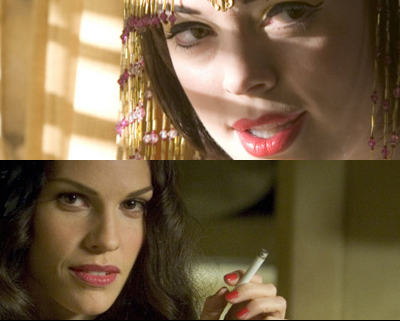 But as I’ve said, next to all the bad, there is fascinating bizarre stuff. Fiona Shaw plays a character that is so unhinged that it’s amazing she even exists in his movie, or any movie at all for that matter. If I thought The Black Dahlia was unlike any film I’ve ever seen before, then Shaw’s performance (as Swank’s slightly perculiar mother) is an even deeper form of crazy.

She only appears in two scenes, but when she’s there (from the very first shot of her) the film jumps several tracks and becomes the deranged David Lynch noir that is just begging to get out throughout – think of Grace Zabriskie in Twin Peaks and you get a similar idea. Shaw’s performance is the very definition of a Supporting role. She takes the films by the horns and does what the actual leads should be doing. She makes everyone else around her look better simply by being in her presence. It also helps that it’s probably the funniest performance of the year too (funnier than Cohen, Jacobson, etc). It’s essentially what Gina Gershon did in Showgirls, but with less tit flashing. 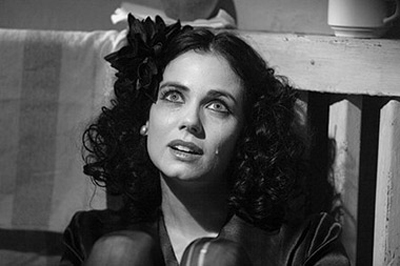 And there’s no denying that the film is, essentially, flawless when it comes to things such as art direction, costume design, cinematography and music. And all that just continues to fascinate. When you’re not staring at the beautiful scenery you’re holding back tears of laughter from the stupendous acting and dialogue. When you’re not devouring the many, many, many stunning and memorable individual sequences (I haven’t even discussed them! I could talk for hours…) you’re getting whiplash from wondering how the previous scene lead to the next. 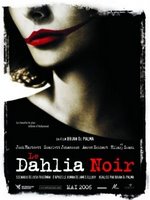 Movies like The Black Dahlia are rare. A movie so hopelessly bad, yet it is because it’s very badness that makes it so fascinating. It would’ve been easy to make a mediocre movie, but everybody is trying to infinity and beyond that I am reminded of that old quote: “Shoot for the moon. Even if you miss, you’ll land among the stars.”

On the Absurdity Scale from 1-5, I rate The Black Dahlia a 4
It's stupendously absurd!
For a proper grade? B+ (or C- if you don’t have a sense of humour)
Posted by Glenn Dunks at 5:19 AM No comments: