Whoopi With Your Best Shot: The Color Purple

Typical me, I got a copy of the film in order to do an entry for The Film Experience's beloved (says I) "Hit Me With Your Best Shot" series. Typical because it's now 2am the day after participants were meant to get their pieces up and here I am doing it now. Sigh. Sadly, not much commentary for this piece. Isn't that the way of it lately?

I really adore The Color Purple. It's a rarity in Spielberg's filmography for him to make a film so purely focused on women and yet - like magic - it's probably his best acted film. Actresses: we always need more of them. I think Whoopi Goldberg is exceptional here, don't you? And then of course there's Margaret Avery and Oprah Winfrey making up the trio of fabulous women. They're the core of the film and that's why I didn't choose the below shot as my favourite, even though it probably deserves it... 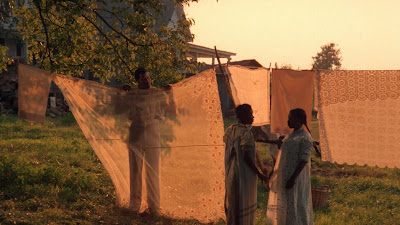 No, I chose this below shot because, well, just look at it. 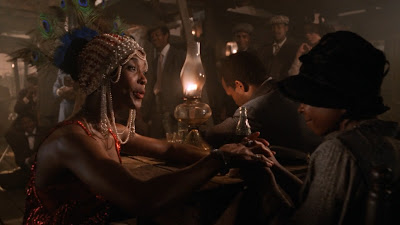 This is a film where even in its prettiest sequences - and there are so very many - the ugliness of the world is shining just as bright. The "Miss Celie (Blues)" number, however, is a moment of pure, unbridled joy. A moment for these two women to be beautiful without question. Heaven.
Posted by Glenn at 2:25 AM

Email ThisBlogThis!Share to TwitterShare to FacebookShare to Pinterest
Labels: Screencaps