Cinema of the Absurd: How to Deal 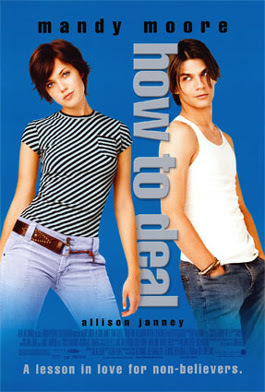 How to Deal really is absurd. Hilariously so. I could nitpick for hours about this movie's absurdity. Even down to the silly belt that Mandy Moore wears on the poster (isn't it weird?) The very first thing you hear when you pop in the DVD (which I own, thank you very much) is Mandy Moore saying "Things happen and you just have to deal." That's really stupid, right? 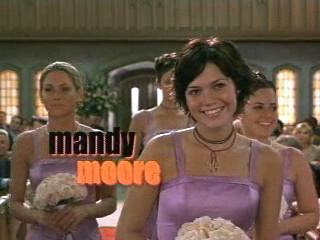 Plot: Halley Martin's life is totally going down the shitter. Everything in her life is a disaster. Her family is a wreck, her friends are a) pregant, b) dead, c) bad news and she's constantly walking through sprinkler systems. It's just not fair. She has to learn... how to deal. And fast!

Family: So, her mother's (Alison Janney) a trainwreck since her divorce, but get this... she starts dating DYLAN BAKER!!! Wouldn't that creep you the hell out! I mean, gross. The dude from Happiness playing a romantic, ahem, drink can dispenser re-filler... man. Is that right? So, yeah, her mother's been bitter for ages because her ex-husband (Peter Gallagher and his eyebrows and really bad facial hair) is dating some half his age (isn't it always the case) and getting married. Tough break for her mother. 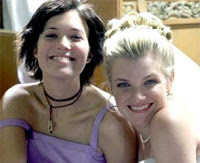 Her older sister is never around anymore because (ugh, so frustrating!) she's organising her WEDDING. Damn her. Damn her and stupid stupid face! When her sister tells her Halley randomly storms out of the house is a huff. She runs funny too.

Halley though has enough sanity in her to do yoga and make wonderful Sex & the City-esque narrational quips like "Some people fall in love. I had to crash into it." Ouch?! She doesn't have enough sanity to make her change out of those awful denim cut-off short shorts though! My favourite moment of wisdom is the one that opens the film. The words are really profound! 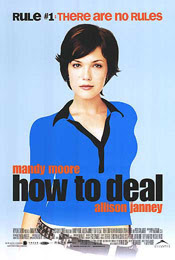 Man. She's so poetic, right? THANK GOD SHE GETS TO CHOOSE HER HATS!!! What world would be living in if people couldn't choose what hat to wear? Seriously. I'd like to know. She calls the day her parents finally get divorced as "Big Ugly Hat Day". Doesn't that just roll off the tongue?

Oh. And then there's Grandma! She likes to "smoke the cannibal". When she shows Halley a pine tree that would make a wonderful textile (apparently), Halley does the natural thing and tasts the pine tree. Doesn't that just make so much sense.

Rain & Sprinkler Systems: Oy. Is there a bigger problem in Halley's life right now than water?! Specifically sprinkler systems. For reasons unknown to me, in order to get to her best friend's (Alexandra Holden) house she has to run through someone else's backyard and, get this, they always have their sprinkler on. Even when Halley is going to a funeral she decides to walk through the sprinkler. You'd think she'd realise after a while. 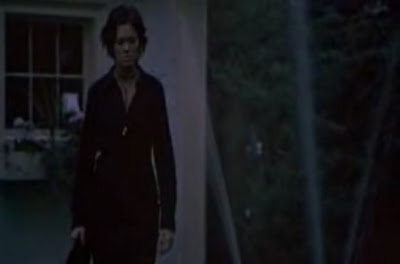 After the funeral (see below) she stands outside the church in the pouring rain. Don't you love it how in movies it can go from perfect blue skies to instant rain, as if the makers have no idea how clouds actually work.

Death: Death haunts Halley at every corner. First the death of her parent's marriage. Then she nearly dies of embarassment when she walks into her best friend's bedroom, omg, WHILE SHE'S HAVING SEX!!!!!omgsoembarassing. (more pearls of wisdom from Halley: "You can't expect to do anything great in life if you buckle the first time some guy bats his eyes you!" Preach it sister!) 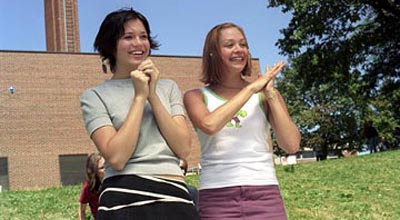 And then one day on the soccer field at school in a game between two bad soccer teams that celebrate way too much when they score a point. Anyway, so on the soccer field Halley and her best friend (her name's Scarlett) witness Scarlett's new boyfriend (Sherwood, if you can believe it, is his name) die right there. "I thought my parent's divorce was the end of the world. That was before Michael died of a heart defect." So blunt.

More wisdom: "Dying is definitely not one of the better concepts." ZING!

Pregnancy: LOL. Shortly after the funeral (the one where Halley walked through the sprinkler system again) Scarlett realises she's preggers to the dead dude! How fortuitous, right? The scene where they find out involves way too many closeups of urine for my liking.

Weddings: Well, her father's wedding is disaster (a near death by wedding veil!), but boy. Halley is negative on weddings, too! "Why do people get married anyway. I mean, we know that they're lying to each other, but are they lying to themselves too?" I suppose she's got a reason to be so down, but still... lighten the fuck up! 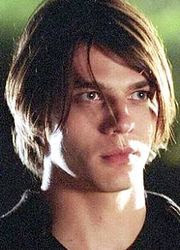 Romance: Then she meets a boy with a name as equally bad, ney worse, than "Sherwood": MACON! (Trent Ford) Lol. Ugh, with the change of seasons means trees start to LOSE THEIR LEAVES! They go all in the pool and completely cover the lawn, which would be a bitch to clean out if Macon Bacon didn't show up with a leaf blower (it's how he earns money, you see!) This tender scene of Halley blowing dead leaves into Macon Bacon's face is then followed by a montage of short clips involving the two laughing, accidentally touching one another and doing wacky music video bits like dancing on top of a bus stop and playing with light sabres in the street. All to the sounds of "Why Can't I" by Liz Phair. A song that, I swear, was used in about 50 different movies from 2003-2005.

--I think at this stage I need to mention something very important. By this stage, everything you have read about How to Deal so far has happened within the first 45 minutes!! Yes, so many deaths, disasters, pregnancies, funerals, dog humpings (Oh, I didn't mention that already, sorry), montages, sprinkler passings have all happened within 45 minutes. Crazy. There's still 50 minutes to go!

Unfortunately, the craziness starts to settle down from here as the story really starts to get into the romantic plot between Halley and Macon Bacon. But, oh, the makers still have some tricks up their sleeves.-- 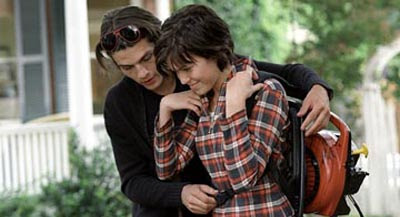 Social Issues: A hard-hitting discussion between Halley and Scarlett about abortion isn't funny, actually. But, what follows is! They have a discussion about "friends with benefits" in front of a Christmas Jesus display. LOL. howinappropriate!! 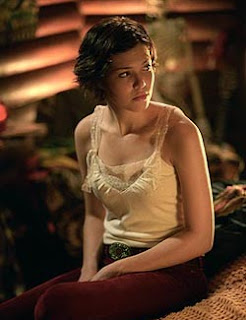 Grounded: Oh, poor Halley! She gets grounded for making it with Macon Bacon in their own house and omg nearly having sex. This all goes down over a soundtrack of some depressed white boy. Of course, this means she'll miss New Years Eve with Macon Bacon so she, naturally sneaks out. She's so badass.

Injuries: At the NYE Halley discovers the awful truth about Macon (he gets drunk at parties!!!) and then gets pissed off and leaves, which ends in, of course, A CAR CRASH!!! Before this though she runs through a field for no reason. And then Macon Bacon is upset because Halley won't have sex with him. "I thought you wanted us to be together." Of course Halley doesn't have a scratch on her after the crash. Can't hurt the precious face of Mandy Moore.

Conclusion: I had never ever seen a film before where so much bad stuff happens to somebody in such a comical fashion. I mean, Halley is meant to be, what? 17? She has death, divorce, pregnancy, she nearly dies, her grandmother is a pot head, she has to wear a poofy bridesmaid dress and she can't stop walking through sprinkler systems! And, I mean, I haven't even mentioned everything! There's pre-wedding breakups, wedding day births, outrageous outfits, bad hair extensions, emergency hospital visits, jedi mind tricks, injured grandparents, "Why does no one trust me to know what I know anymore", Halley's mother having sex with Dylan, on-air radio fights and many many more pearls of wisdom.

I gotta point you in the direction of this hilarious How to Deal drinking game! 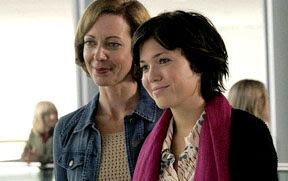 2. Someone eats a chocolate thing

3. Someone does the Jedi mind trick, or even mentions it

4. Macon is under Halley's window

5. Ashley and Lewis get into a fight

7. The Dad or anyone else howls

I'll leave you with one last nugget of wisdom from Halle.

"Maybe being abnormal is what's normal."

On the Absurdity Scale from 1-5 I rate How to Deal a 4.5. It's ridiculously absurd. How can so many things go wrong in anybody's lives outside of a Alejandro Gonzales Inarritu movie?

Click above to watch a delightful montage of scenes from How to Deal. It's precious.
Posted by Glenn Dunks at 5:06 AM No comments: