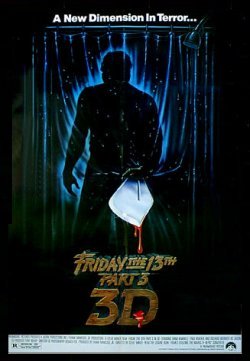 Nothing can prepare you for the onslaught of murder and mayhem that is present in Friday the 13th Part III. ...lol, sorry. I tried to type that with a straight face, but I couldn't keep it up. You really wanna know what there's an onslaught of in this film? Laughs. This movie has it all! Eye-poppings, knitting murders, small-town biker gangs, a weird disco soundtrack and it's all in glorious 3D!!!! Now, this was only in 3D on it's theatrical release in 1982 so unfortunately the DVD release just features characters throwing things at the screen, which has it's own wonderful entertainment value.

Plot: Following on directly after the quite dire Friday the 13th Part II, Part III again follows a bunch of teenagers at some random lake who don't know it yet, but are soon all going to be killed with humourous ways by Jason Vorhees - new and improved after dying in Part II and gathering a new mask (the debut of the famous Hockey Mask). Personally, I think the heavy-handed social commentary weighs it down but that's just me. :P. Let's discuss.

Warning: This entry contains images and discussion of violence. Please don't read if you wish to remain innocent and carefree *chuckle* Also, this is very Spoiler-heavy so don't be annoyed when I tell you who dies! 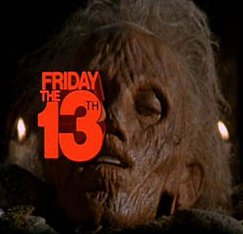 The Set-Up: The film starts with one of the scariest images you'll ever see. The words "Friday the 13th" and "Part III" appearing out of the eye sockets of the rotting head of Mrs Vorhees. That's not the scary part. The scary part is the absolutely mind-boggling DISCO SOUNDTRACK! Gloria Gaynor does Jason! I don't think this moment is bested as the film's most unintentionally hilarious moment. The Friday the 13th theme being turned into a disco inferno is priceless. And in 1982 no less. 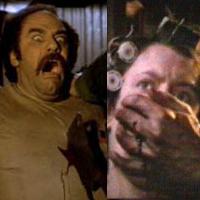 After that brilliant title design we get a wonderful opening featuring two old people getting murdered! He gets an meat cleaver to the chest, while she gets the better death, by getting her knitting needle through the brain. Suffering for your art is so tiresome. Let's not even bother to mention who these two actually are. They're just randoms, which makes their deaths even more comical.

We then move on to the real story of the film. YOUNG MOSTLY-NAKED VICTIMS! You can always tell who the lead role is in these films because they always have a HIDDEN PAST. This is easy to spot as they are the one who looks off into the distance/at mysterious shacks/out across the lake/at the only exit/warns everybody to not go skinny dipping at midnight because they'll catch a cold.

This time we get the usual suspects. The girl with the mysterious hidden mystery past, the boyfriend, the best friend, the practical joker who will pretend he's been murdered early in the movie only to be murdered for real later on, etc. Oh, and randomly there's some hippies joining them? I don't even think they knew each other before this supposed road trip. 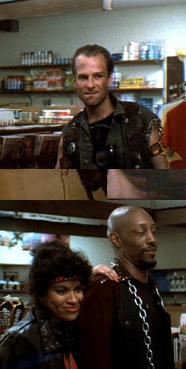 Hilariously we get a subplot involving a small town rebel motorcycle gang! These guys (well, 2 guys and one badass mofo chick) terrorise convenience stalls and like to hide out in empty barns. WOW. I don't really get why they are even in this movie other than to up the (inevitable) body count.

The Slaughter Begins: This is where some hilarity really happens. We get many many murders in Friday the 13th Part III (more than in the other two) with 12 altogether (including that poor bunny rabbit on the side of the road. We assume that was Jason's doing because he hates everything, even bunnies). The biker gang bite the dust in the barn (for no apparently reason) but there's a twist coming up later that is just too good. They die with the help of some 3D effects and farming tools. Priceless. It's also not explained why there is a barn right next to the lake in the first place, but that's just being pedantic, isn't it?

Other deaths come via spears in the eye (in glorious 3D), machetes to the body (while doing yoga!) - both can be seen above - and a retread of Kevin Bacon's death in the original Friday movie, we get a girl sitting in a hammock getting a sharp object in the neck! YAY! That one's hilarious because the make-up job is so bad. Really bad. There's some throat-slitting (the practical joker dies in such a boring way, it was really depressing) 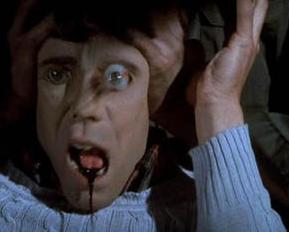 And I'm not even going to tell you what happens to this chick. Hilarity ensued though. Also, in this movie, Jason dies twice! He first gets thrown of a balcony and hung in a noose. He then later, after somehow surviving, gets an axe to the face. The lead actress (Dana Kimmell btw) has two of the best reaction shots I've ever seen. "No! You can't be alive!" after realising he's alive for the first time and then a look of pure horror as Jason continues to come towards her even with an axe in his face. Way to go Dana! You're definitely my favourite Friday the 13th chick. It is this moment with the axe that includes the return of the bikie gang leader! Apparently he has Jason-style ability to survive impalings and such and returns rather randomly, but dies a mere second or two later. He gets his arm chopped off! Sweet. 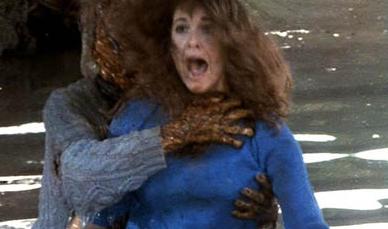 The 3D: This film was made at the height of the 3D-'80s movement. As I mentioned earlier, the DVD release isn't actually in 3D so it features a lot of characters randomly waving sharp things at the camera. Thing such as bats, pitchforks, machetes, spears, axes, eyes and entire bodies and even yoyos (I suppose it was made at the height of yoyo popularity too?). It's all rather silly, but hilariously entertaining. Watch as the bikie leader waves a pitchfork around like a fool. I almost felt as if he was waving it at me (the point, I suppose) but makes me go "Why are you waving that thing at ME?!" 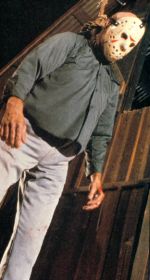 Jason: Jason is a hoot and a half in this flick. When he's not killing people in hilarious ridiculous manners, he's being an absolute moronic klutz. He has zero balance and falls over and the slightest touch and he gets his body parts (keep it clean people) stuck in all sorts of places (again, keep it clean). Although, he does have stellar aim!

Conclusion: Friday the 13th Part III is my favourite of the franchise. While the original is a fun-as-those-things-go type of affair, the second wasn't much cop and the others I have seen are mostly dumb. Jason in Manhattan would be a wonderful contender for this series if the movie was set in New York - only about 10 minutes of it are (and they are indeed absurd yet wonderful), and Jason X is just bad. But this one is So. Much. Fun. Even without the 3D it'd be a blast, but the added bonus of idiots waving silly objects around makes it even better! And who can go past the murders! Murders in 3D no less. Eyes popping out at you is just wonderful. The proposterousness (is that a word?) of the whole thing made me fall in love. It embraces all the cliches of the horror genre. This is a perfect movie to sit around with a group of friends (who like this sort of stuff), have some drinks, and laugh your freakin' ass off.

On the Absurdity scale from 1-5, I rate Friday the 13th Part III a 3.5
It's really absurd, but it's hard to penalise a movie that waves funny objects in your face and thinks it's scary!

(click the above image to watch a wonderful Friday the 13th Part III clipshow. Brilliant.

I really need to thank Ultra Secret Website for the images.
Posted by Glenn Dunks at 7:12 AM 3 comments: