Wherein I attempt to watch 31 horror films over the course of October. 31 horror films that I have never seen before, from obscure to acclaimed classics. We'll see how well I go in actually finding the time to watch and then write about them in some way.
It took actually seeing this movie to realise I've spent my entire life having absolutely zero idea of what it was about.

One of my earliest movie memories is adoring the video cover of the Dead & Buried VHS in the horror isle of the local video store. So many of the images in that section of the shop left imprints on my brain, but Dead & Buried was one of the greatest. As I've said though, you could have asked me what it was about about and I would have had to shrug my shoulders. I certainly wasn't aware it was about voodoo zombie clans running around taking photographs of victims. I would have guessed it was about some sort of alien creatures emerging out of the Earth to attack a group of horny teenagers. Ya know, I'd just assume.

The poster labels Dead & Buried as from "the creators of ALIEN", but there's really nothing at even remotely similar to Ridley Scott's 1979 sci-fi horror masterpiece. Not in terms of scope or talent, and certainly not in terms of scare factor. It has a nice, novel setup - new arrivals to the town of Potter's Bluff start popping up dead and the new Sheriff must investigate, leading the way to all sorts of grisly revelations involving the town's beloved mortuary owner (Bernie he is not) - and several scenes really work fabulously, but it never really gets out of its shlocky '80s groove to become anything more. It actually reminded me a lot of Stephen King's The Tommyknockers (or vice versa, I suppose, since that novella came out in 1987 and the miniseries several years later) with its horde of calm zombie creatures. 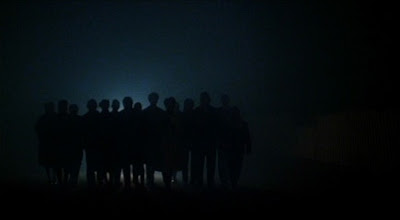 There are moments throughout Dead & Buried that give major hints at what the final product could have been, but director Gary Sherman somewhat fumbles the ball in the final act. The reveal of just what has been going on this town doesn't have quite the impact as it should. It has a great look to it, with a lot of beautiful polish - certainly more than I was expecting from a film of that era - and the make-up effects are deliciously grotesque from time to time (although what's up with the baaad finger effects of the final scene?), but I never truly got the horror of the story. For a film that was once designated a "video nasty" in the UK, it comes off as awfully easy to watch. B-
Posted by Glenn Dunks at 11:13 PM