Wherein I attempt to watch 31 horror films over the course of October. 31 horror films that I have never seen before, from obscure to acclaimed classics. We'll see how well I go in actually finding the time to watch and then write about them in some way.
Dear readers, put on your jelly bracelets, and your cool graffiti coat! We're going to the mall and having fun is what it's all aboot [sic].

You guys, Chopping Mall is so much fun! I loved it. The 1986 robots-go-berserk-in-the-shopping-mall slasher flick is a total hoot and naturally all I'm doing now is listening to Robin Sparkles' "Let's Go to the Mall" on repeat as I google images of the super foxy (and supremely douchey) male cast. The men of 1980s horror flicks don't get enough recognition and I believe it's my (and Jason Adams of My New Plaid Pants, of course) job to rectify that.


There's even a robot!!! Granted, not a robot with homicidal tendancies brought on by a freak thunderstorm after closing time, but a robot nonetheless. I like to imagine the writers of How I Met Your Mother were fans of Chopping Mall (nee Killbots) and wanted to make Sparkles' "minor hit" of 1992 an homage to this wacky flick. If anything, Chopping Mall proves that "Let's Go to the Mall" is a scarily accurate portrayal of '80s teen life. Chopping Mall does everything that Bait 3D didn't do recently and have total whackadoo fun with its thick-as-bricks plot. There's a proposed remake that, like so many "remakes" lately appears to merely be snatching a famous(?) title and rejiggering it with whatever the filmmakers wish. I'll stick with the original (I mean, what crazy way are they going to make mobile phones irrelevant to a new version?) and that episode of The OC where Ryan, Seth, Marissa, and Summer got trapped in the mall that one time.

Totes didn't have to even look up those character names from The OC. And I wonder why I'm single, ya know?

There's little more to Chopping Mall that I've already alluded to. Robots, previously designed to work as security for a modern, new age shopping mall, go haywire and start hunting down the people trapped inside. First the human security guards and then a janitor, followed very quickly by the eight teenage shop employees who were having a party in the furniture store. By "very quickly", I do mean very quickly. By the 35 minute mark it felt like the characters were gearing up for the big climax sequence. It goes by extremely fast, even for a film that's only 77 minutes long.

Jim Wynorski's film - Wynorski, by the way, who is now directing movies like Piranhaconda and spoofs called Cleavagefield - is actually surprisingly brutal. I figured it would be quite tame for some reason, but there are some quite violent deaths. There are electrocutions, throat slashings, laser wounds, explosions, plummeting elevators, head burstings, and even one poor gal getting set on fire! The "final girl" even leaps through a plate glass window at her own accord. The actor that gets her head blown off even gets the hilarious indignity of having her end credits screen grab be, er, well, this: 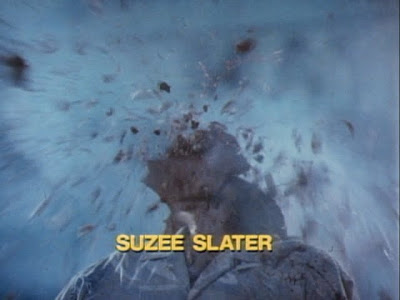 Are you not amazed?

The robots are quite ugly to look at, sort of with the appearance of a squashed penguin with its duck-bill laser shooter thingamajig and silly cardboard boxy exterior, plus the sound they make rather annoying. The dialogue, however, is thoroughly riotous with such ding dongs as "I guess I'm just not used to being chased around the mall by killer robots", and this delicious exchange between the virginal Kelli Maroney and Tony O'Dell: "Nice shot!" "My dad's a marine." And, really, that's just the beginning of Chopping Mall's, ahem, thrilling madcap fun. Oh, and can I just mention how glad I was my flatmate wasn't home during that pet store sequence? I was literally SCREAMING AND COVERING MY EYES! Neighbours could've heard me, I'm sure.

Of course, it wouldn't be an '80s slasher flick if it wasn't a lil bit of a flasher flick, too! While the hetero dudes in attendance got some pretty ladies to look at, and one - that'd be Barbara Crampton, I believe - that gets all tits outs for the boys kicks, it's the women (and, yes, the gay men) who get the prize picks. Four good looking guys, most of which are in a state of undress at some stage or other, acting mostly like sex-crazed teenage pigs and, ugh, kinda sexy. I have no idea who John Terlesky is, but can his 1986 self do some time travelling to right now and show up on my door step? His character is a total wanky douche, but who cares?

Shameless, I know, but what are you gonna do? Somebody needs to be out there screencapping 1980s horror for the male flesh as well, you know! I'd certainly never say no to Russell Todd either.

Chopping Mall! Your Fly Buys rewards card can't help you here! Can I watch it again now, please? B+
Posted by Glenn Dunks at 6:00 PM

Email ThisBlogThis!Share to TwitterShare to FacebookShare to Pinterest
Labels: 1980s, How I Met Your Mother, Review, Scary Stuff, Screencaps, Sexy, Thats So Ridiculous

Why no mention of Paul Bartel and Mary Woronov reprising their Paul and Mary Bland characters from the great Eating Raoul?

They were the best and most unexpected part of the film.

I thinking you must have born AFTER 1970. If so, I forgibe you. John Terlesky was total eye candy and the BEST part of any movie he was in. Mainly because the movies he was in were such crap that we kept watching just to see what what he'd be wearing in the next scene. In Deathstalker II (a TOTAL CRAP-FEST! You must Netflix it.) he went from leather pants (pant, pant, pant...) to a loincloth! Sorta.
He was also the star in some of my wildest dreams!

Just got done watching this on youtube. No joke, I'm actually trying to watch 31 horror movies during October as well! I swear I had no idea you were doing the same thing until I was five movies in, haha. I thought "Chopping Mall" was pretty good. I mean, killer robots in a mall? That's pretty sweet. When they started shooting lazers that's when shit got real and super fun for me. The only part I really hated was when that one girl got injured and fell down and neither of the other girls helped her despite her pleas. So sad yet so funny. By the way, I had no idea you were a fan of "How I Met Your Mother"! Robin Sparkles for the win! "And don't forget the robot."