With each of his first three feature films, famed music video director Tarsem Singh has gone by a new name. At first it was Tarsem Singh, then just Tarsem, and then Tarsem Singh Dhandwar. For this fourth film, the updated fairy tale (some would call it “revisionist” since that’s the hot word these days, like “reboot”, “prequel” and others before it) Mirror Mirror sees him revert back to Tarsem Singh and whether the man is secretly trying to convey a hidden message by doing so or not, the man has done enough in my eyes to change his name to Elizabeth Taylor Fancypants McGregor and I wouldn’t care one iota. He is such a rare gift in Hollywood, with films so richly decadent and a feast for the eyes that – to take a page from his latest – I routinely find myself falling under the spell of.

Whereas his first and third films were violent otherworldly fantasies (The Cell and Immortals), his second and fourth features have been buoyantly lavish fairy tales. Mirror Mirror sees Singh veering away from the original, globetrotting fairy tale of The Fall, MIrror Mirror takes the much more familiar tale of Snow White and the seven dwarves and spins it into a comical farce, sumptuously designed and hilariously bonkers in equal measure. First and foremost a movie for kids, its pleasures are not bound to one’s age, instead its rhythmic absurdity should prove a delight for those of any age with a penchant for bright-eyed, candy-coloured visual madness. Curmudgeons will surely find its big-grinned magic hard to resist; its somewhat off-kilter marketing campaign hopefully setting many up for a world of surprise.

Mirror Mirror more or less follows the traditional tale of Snow White that we know from the Brothers Grimm as well as the Walt Disney animation of the 1930s. This time Snow White is kept prisoner in the castle by her evil stepmother after the disappearance of her father, The King. Upon daybreak outside the castle walls Snow happens upon a near-naked Prince, the victim of bandits who reside within the forest. Basically, you can guess what happens after that as Snow White ends up living with the famed seven dwarves before enacting revenge on the Evil Queen, reclaiming her father’s kingdom as well as the love of her charming Prince. 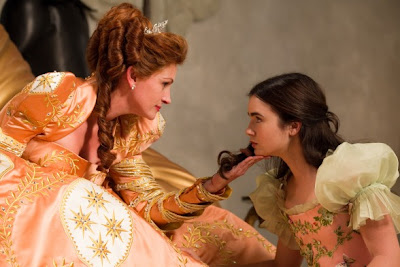 What makes Mirror Mirror so special and not just a tired, flat retread done with enough bells and whistles to feel unique is the flare with which Singh has gone about it. When the term “kid’s movie” cans sound like a dirty word for cinephiles, he has turned the dial up to eleven and embraced the inherent zaniness of the plot. Unafraid to capitalise on the artificial idea at its core, Mirror Mirror fills its frame with an abundance of weirdness, the kind of which is rarely found in a mainstream live action movie for children. The sound editing and visual effects are particularly cartoonish and risk ridicule in being so. The cast, too, are game for the challenge and all elevate their performances to a degree of camp rarely seen. Julia Roberts, particularly, as the evil Queen Clementianna is clearly relishing the chance to be so openly playful with her image, and Armie Hammer is truly delightful as the slapstick charmer. The Queen’s rather overt horniness of his frequent disrobed appearance is one of the film’s most kookily amusing running gags.

As Snow White herself, Lily Collins is a lovely screen presence and her porcelain skin certainly speaks to the story’s origins. I expect a grand Hollywood death match between Lily Collins and the Lynn Collins of John Carter where only one wins fame and fortune. If Lily is willing to work on such obviously nutso productions like this then I hope she wins (we’ll forget about Abduction, okay?) 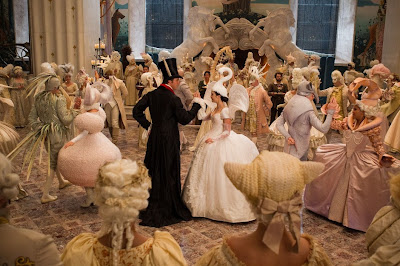 Of course, as all Singh films have been in the past, Mirror Mirror’s true claim to fame will be the enduring fabulousness of costume design Eiko Ishioka. The Japanese design legend passed away earlier this year and just six months after hitting us with Greek mythology chic in Immortals, she has done perhaps her finest work since winning an Academy Award for Bram Stoker’s Dracula. The Academy may as well go and engrave her name on a posthumous Oscar right now since the extravagant duds on display here are truly a work of stunning art. The seemingly never-ending parade of overflowing ball gowns, stuffed shirt pomp, frilly lace collars, exquisitely tailored corsetry and stunning jackets (that yellow ribbon jacket is rather to die for) in every colour you could possible imagine – the “color designer” gets their own singular on screen credit! – are a sight to behold and truly a majestic piece of fairy tale couture that will send fans of costume design into frequent fits of giddy joy. There’s even a fashion montage that feels like it was personally put in just for me. A Singh/Ishioka collaboration was always an event and the next film of this man’s will just not feel the same without Ishioka’s miraculous vision.

It takes a lot to truly get me grinning from ear to ear for a film’s entire runtime, but from the weird animated opening, the bizarre yet thrilling mid-film marionette action sequence, the appropriately bonkers make-up and art direction, and, yes, the enjoyable sight of Armie Hammer sans clothes, I couldn’t resist this film’s oddball charms. The upcoming Snow White and the Huntsman may have the gritty pop culture cachet, but Mirror Mirror’s childlike mentality shouldn’t be overlooked. In all fairness, Mirror Mirror is a blast that recalls the best works of Walt Disney whilst living very firmly in the present. A-
Posted by Glenn Dunks at 1:10 AM

Interesting review! I had thought the trailer looked cute and a bit silly, though figured it would get rotten reviews up and down. It makes me more interested in seeing is, since it's been getting good reviews!

I am so, SO surprised by the overwhelmingly positive reviews this film is getting. The trailer seemed really bad - so bad, in fact, it took me all of five minutes to share it on Facebook and then proceed to mock it for the following week.

But now I'm actually looking up showtimes. Let's be honest here - there's Julia, who I've been missing lately, the hunky lead whose name I can't remember for the world and humor that I'm taking your word is good. Mirror, Mirror, here I come!

Oh, and the costumes and scenery looks amazing. AMAZING.

BTW, I love your blog. I bookmarked it and will be coming back. :)