One of the best new blogs to show up lately has been Why I Adore, a new project from Mr Paul Anthony Nelson that aims to be a negativity free zone and to allow writers to express true feelings of adoration about movies, actors or anything related to film and TV that they love without threat or worry of Internet trolls whose sole mission it is to criticise people for their opinions.

This week, the sixth edition, was my turn and I decided to discuss my adoration for one of the most maligned films I could think of from the last 20 years, Gus Van Sant's shot-for-shot remake of Alfred Hitchcock's Psycho. A movie so fascinating that I've watched it many times - not as many as the 1960 original, but it's probably closer than you think - and consider it a stroke of experimental brilliance.

A good 38 years had gone by between Hitchcock’s original and Van Sant’s take, and I think this remake acts as the most glowing and praiseworthy critical assessment of Hitchcock’s film that has, can and will ever be. People have spent decades studying this film and yet no piece of film criticism can come quite to the level of outright lust for Psycho that this remake presents. Gus Van Sant loves Psycho. There is a reason he remade it "shot for shot" and it’s because he thought it couldn’t be improved upon. Van Sant even set the movie in the modern times to prove how timeless Hitchcock’s Psycho is. ... The remake is love

I considered using one of Norman Bates' famous quotes, "We all go a little mad sometimes" to describe it, but then I realised that was being a self-loathing. I don't think there's anything mad at all about liking Psycho '98. And, hey, if it's good enough for Nick Davis then at least I know I am in good company. 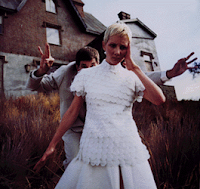 You can read the entire thing by clicking over to Why I Adore and if you would like to leave a comment please do so, but know that all comments are moderated and anything negative gets promptly deleted. That blog is a negative free zone! What do you think though? Do you think I'm mad like Norman or rational like... umm... are there any rational characters in that movie? None of them seem to think clearly at all, do they? Hmmm. 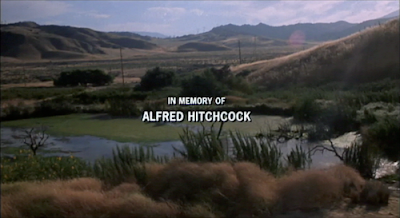 Um, I adore them both too, but Nick Davis and Nathaniel Rogers = different people ;)

Yes, Nick Davis not Rogers. Thanks!

I wouldn't say I adore Van Sant's Psycho, but I do appreciate it. I think it's a fascinating experiment in film form, in how much (or how little) a film's story and even its storytelling really dictates its feeling and its meaning. After all, Van Sant's film shares with Hitchcock's the same narrative, nearly the same dialogue, even mostly the same shots. So the story and the way it's told are the same; what Van Sant changes are the colors, the emotional tenors of the performances, and in subtle ways completely changes the tone of the material. It's truly fascinating, and you're right that it's both Van Sant's love letter to the original and his analysis of it, his dissection of how and why it works even. It's a piece of film criticism.

It was widely misunderstood at the time, and partly through Van Sant's own fault, since he kept insisting that he was remaking the film for a new generation that couldn't be bothered to sit through old, black-and-white movies. I don't think that shallow goal was really what he was after here. The film doesn't entirely work, and it doesn't work at all as an autonomous entity, but as a reaction to and analysis of Hitchcock's original, it's very much worth seeing and thinking about.