Prom Night II: Hello Mary Lou (or Hello Mary Lou: Prom Night II depending on what country you're from) is a horror film from 1987. It shares literally nothing whatsoever in common with it's predecessor, Prom Night, other than, yes, a prom is involved in each. This sequel revolves around the ghost of "Mary Lou" (Lisa Schrage), a high school slut who died at the prom in 1957 and has now taken over the body of "Vicki" (Wendy Lyon), a plain - some may some homely - schoolgirl who was recently nominated for Mary Lou's coveted Prom Queen title.

The movie is generally uninteresting and, much like Prom Night, is kinda boring and has that washed out look that a lot of 1980s horror flicks have. What is incredible about this movie is how completely and utterly 1980s it is. The fashion! The hair! The new wave music ripoffs! As I watched this movie I got the unsinkable sense that Flock of Seagulls had been really popular in Canada at the time. Oh yeah, this is a Canadian movie! It's basically what would happen if the cast of Degrassi performed an amateur production of Carrie! 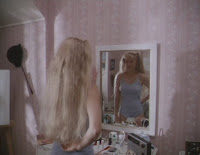 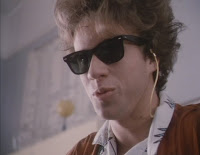 Sunglasses... on a chain (but not at night)! Oh lordy. 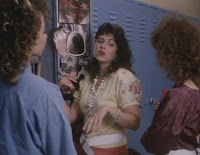 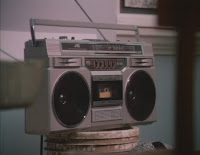 I had a "boombox" just like that when I was a young'n. 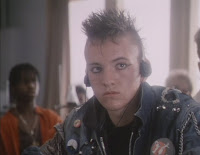 You cannot deny that this is incredible. 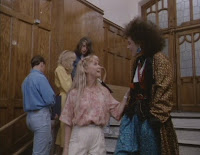 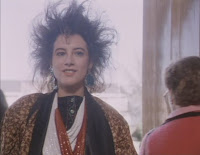 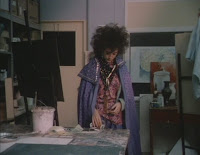 This is Beth Gondek playing "Jess" who looks like Joan Cusack in Working Girl, but even funnier because, umm, this is set in a Canadian high school, not New York City. Jess has a secret - at first I thought she was a lesbian who was in love with Vicki, but it turns out she's just preggers to a creep who won't call her back! Mary Sue's demonic spirit throws her out a window. Poor Jess. POOR JESS' CAPE! 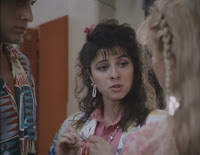 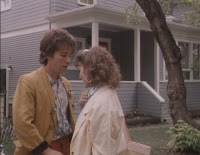 I see so many different hair styles in just these two images. And that's a big "Hello!" to the shirt that guy is wearing in the first picture (I never caught that character's name.) 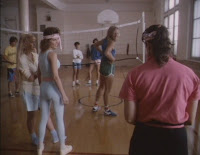 Is that scene set in a gymnasium or a fashion mall? I never can tell with the 1980s. 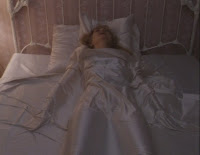 I just find this picture amusing, don't you? 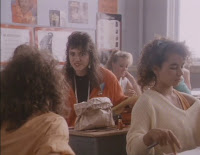 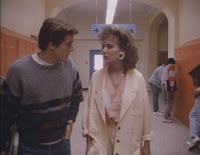 I love that people wore this shit TO SCHOOL! 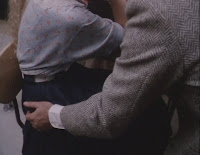 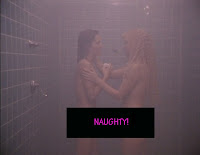 I'd like to point out that that first image is a school teacher caressing the buttocks of Vicki. Yes, a teacher. Amazing. That second picture? Okay, there's an entire scene in Prom Night II: Hello Mary Lou in which Vicki chases her next victim completely starkers. And I don't mean in any Austin Powers sorta way, I mean complete head to toe nudity. Way too much vagina in this scene, thank you very much. It's the most ridiculous thing in the entire movie and that's saying something! 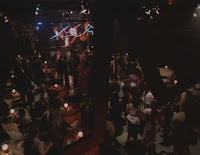 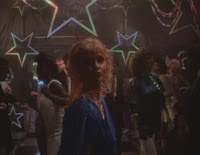 I love that this Prom looks like nothing more than an Oingo Boingo videoclip with some fluorescent stripping. 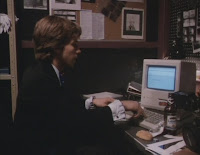 Look at that computer! It makes The Net look positively modern! 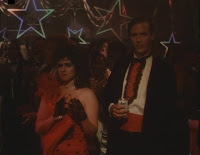 What losers.
This next shot, the final one thankfully, isn't particularly "omg how funny were the '80s?" but I found it equally as hilarious. It's right after Vicki has won the title of Prom Queen and she stands on stage accepting her crown, but she's not elegant at all. She stands up on the stage in the high school auditorium like she's Ethel Merman on a cruise ship. 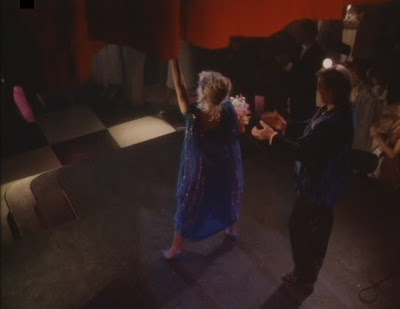 And that's basically all I have to say about Prom Night II: Hello Mary Lou other than to share with you my favourite moment from the movie. Favourite because it was so unexpected. Don't have the volume on at work though, kids!

Wait, in Australia it's "Hello Mary SUE"? That's so randomly delicious. I was fascinated by this video cover box every time I passed it in blockbuster, back when I was a child and too scared of horror movies to even think about renting them. If only I knew what I was missing.