Read Part One of the countdown from yesterday, if you didn't see it, before we continue on today with the best posters of the decade.

Something about such a clean line makes this quite cold-design stand out (notice how it sorta looks like a back-to-front Z?) The detail looks so real and that tagline is excellent.

If you have a film that is a hard sell and has a scene that is sure to infamous then my general rule would be to utilise said scene in the marketing and that's what they've done here. The image is disturbing and frightening and the font play is another way the audience can become discombobulated. Gives me the creeps.

It just feels so grand and old-fashioned (although I'm not sure why). Perhaps I am just biased towards the film - although this is the only poster that I am really keen on, for what it's worth - but the image has a mysterious quality that I've never been able to shake.

Samuel L Jackson tying Christina Ricci up in chains on a retro grindhouse style of poster? Sign me up! Perhaps that's why the film flopped, because the marketing was so spot on. You can't say they chickened out!

Hot Jesus on a Sunday afternoon I think we could all afford to see that poster hanging in cinema foyers and on Blockbuster shelves couldn't we? COULDN'T WE?!? Why should women be the only ones objectified on movie posters? WHY?!

The first of two Woody Allen posters to show up in the countdown. Fun visual gag alongside that attention-grabbing silhouette and a silly, but delightful, tagline. Considering the efforts that have gone into some Woody Allen films this past decade (go have a look at the horrendous designs for Whatever Works, Scoop and Anything Else) I think we can safely call this one a winner.

OMG! He's disappearing before our very eyes!!! You get the idea.

This (literally) shattering design that floored me the most of the film's many various designs. And for a movie poster to so bluntly push the film's sexual abuse angle is quite shocking.

It's not the most clean and well-executed poster on the list, but I love the idea and the almost home-made look of this Asian poster for Andy Kaufman's workout for the mind. It's a collage and I do love a collage!

As part of a three-piece series this one-sheet featuring Gong Li bathed in shadow and sex stood out. Delicious blue colour and mystery out of the wazoo makes this poster just ooze Miami fever.

The ultra-indie mumblecore movement brought us some unique and wonderful designs this decade from outside of the system and I have no idea what the movie is and yet I feel like I must see it or else I will EXPLODE. A lot of the time posters for these low budget independent movies can be really bad, but sometimes they have the luck of hiring a great designer (not necessarily a great design studio) who can come up with something like this.

13. Dear Zachery: A Letter to a Son About His Father

Quite moving, isn't it?

When I said up above at #20 that Woody Allen's Anything Else had been saddled with a dreadful poster I did not mean this - yet again - Asian design. What a treat this one is! Overflowing with visual delighs, from the use of that old-style map of New York City to the funny drawing and the apple and it all just adds up to something wonderful and almost whimsical (but not in the annoying indie way).

This poster freaks me the fuck out!!

A masterpiece of imagery. Oh to be in the room when this idea came up, huh? I think everyone's heads must've exploded.

Horror one sheets need extra care and attention, they really do. They need something to stand out. And on that, this design for House of Wax does it's job perfectly, selling the premise (they turn people into wax statues) and doing so in a creepy and effective manner.

The posters for American Gangster are the reason why I spend so much time discussing the bad posters. This film is incredibly mainstream with a couple of big stars and an easy-to-sell premise, just like many movies. Except unlike those other movies the makers of this one chose to actually do something altogether different instead of throwing a couple of giant floating heads hovering over a pile of guns and cocaine like you would normally expect.

Another Jeremy Saunders design. I love the imagination on display here and for a movie that plays very literal (it very much relies on its words as spoken by intelligent people) it's a very sly design.

6. The Centre of the World

5. Anacondas: The Hunt for the Blood Orchid

I haven't seen this movie, but I can't imagine it being anything other than ridiculous C-grade shlocky horror. Thankfully for us poster work doesn't discriminate and shlock horror tends to produce some of the most interesting designs. That is very much the case with Anacondas. This poster makes me wish that it had been around during the times of VHS and it would have used that bubble design and I probably would have spend time at the video store just ogling it.

There are but two things you need to sell when it comes to INLAND EMPIRE. Those are David Lynch and Laura Dern. That they used Laura Dern's FAAACCE moment is what makes this design work so wholly. It is truly one of the scariest posters I have ever seen and yet I still want to hang it on my wall.

More Jeremy Saunders. I told you he was a genius at this stuff. So much has already been said this past year about this poster - hell, I've already done a blog piece on it earlier today - so I won't go into it again, but just look at it and tell me it doesn't make you queasy, excited, frightened, intrigued and perhaps even a bit giggly.

It's brilliant and I love it and it's amazing and perfect and stunning and just seriously great. From the comic book style, to the colour, to that amazing Emily Barclay pose to just everything.
And so we come to the top of the list. When I decided to do this list I already had the #1 spot locked and loaded. I didn't need a second opinion or to think it over, nothing. I knew. And I'm pretty sure you knew too! 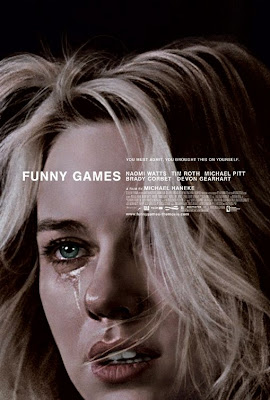 A poster that, itself, plays games with the audience. Is it a movie still? Is it painted? Is it just photoshopped? Who knows. I don't and I don't care, because it just looks so incredible. It would have been so easy to make this one of those annoying stripey posters or one where Naomi's tear-stricken face adorns the bottom right hand corner surrounded by empty space, but it's not. They chose to use an image that not only strikes possible pain, anguish and terror into anyone looking at it, but does so in a manner than screams "WE'RE HERE!" There's no hiding from Naomi's face on this one.

The contrast, that image, that tagline, the simple helvetica font, it all just works. It's become iconic in poster-watching circles and for good reason. It's topped most similar lists to this and, for a change, group think is actually right! Viva la Haneke, I guess. Nothing can get me to actually watch the movie (so perhaps that's an immediate fail right there?) but this poster should be plastered all over my wall like wallpaper and like the Mona Lisa it would follow me everywhere.
And that's that folks. Hope you enjoyed and hope you got plenty of eye candy out of it. Feel free to discuss in the comments. Agree? Disagree? Do you think I missed anything (I didn't)? Dive in if you wish. It's been a blast.
Posted by Glenn Dunks at 3:03 AM

Mulholland Drive's poster is one of the few 'floating head' posters that works. My theory for why it does is that is you ignore the palm trees and hills and hollywood sign and focus on their faces, all those elements blend to make it look like they are the bodies of the two women. The line of palm trees beside Watts appear to make her shoulder, and you could even argue the hills and hollywood sign appear to be Harrings arms around Watts.
Just a theory :)

There's an insightful interview with FUNNY GAMES poster designer Akiko Stehrenberger at The Auteurs, along with some alternate versions.

The poster definitely compelled me to see Fuuny Games.

I'm so glad you included the 'Girlfriend Experience' poster. When I first saw it, I couldn't quite figure out why it was so poppy and alluring. Then I took a closer look. Those dots! That tag line! Glorious! I laughed for an hour in my head.

Also, I much prefer this design for 'Mulholland Drive':

There's something very spooky about the exposure washing out her face next to that thick, dark eye and the shadowy blue-black scene above. You can't really tell exactly who she is (I first thought, 'is that a man dressed as a woman?'), but her face still imparts strong emotion: a sort of longing desperation.

Fitz, it would have compelled me to see it if I hadn't already seen and wildly disliked the original and I was aware it was essentially shot-for-shot.

Adam, I thought those posters for "Mulholland Drive" were too obvious in their presentation of the dark themes of the film when, at least for me, the genius of the film is the sparkly Hollywood dream stuff of the first two thirds, an aura that the poster I chose represents.