This morning I read a nicely put piece on the issue of "weird for weirdness' sake" that argues people who make such complains about certain films are using a film's very unique quality as a scapegoat for their inability to like a film. I've seen films that are weird and liked them, and I've seen films that are weird and disliked them, but while I can sometimes understand a person's misgivings over a film due to some impenetrable oddness, I also don't think it's a filmmaker's responsibility to be coherent when they're not working in a familiar wheelhouse. Personally, I think to say a film by David Lynch is "weird for weirdness' sake" is to, quite frankly, not be paying any attention whatsoever, but I can certainly see where somebody could find his variety of weird cinema unpalatable. There's a big difference between personally not liking it and thinking the director has nothing to say. This all ties nicely together with a double feature that I attended this last past week of Alejandro Jodorowsky films at The Astor Theatre.

I'd never seen any of this famed Mexican director's work before, so the chance to his two most famous titles together on the big screen in 35mm prints was one I wasn't going to pass up (it meant skipping the press screening of Jennifer Westfeldt's Friends with Kids that I'm not terribly upset about). I had heard much about Jodorowsky's famed 1970 cult breakthrough, El Topo, but I know now that one can never know what to expect. If I see any of this man's other work I certainly won't make the mistake of thinking I know what I'm getting myself in for It's history as one of the original "midnight movies" was a definite lure, and in that regard I am certainly glad I got the chance to see it (one can't have an opinion on a film without actually see it, no matter what the internet tells us these days), but I can't say I enjoyed the film too much. Yes, it's quite strange, but it's strangeness isn't particularly interesting or portrayed in any visually arresting manner. The film's second half, with its exploitation of disfigured incest victims featuring quite prominently alongside its heavy religious iconography, proved to be a further tedious excursion into a rather uninteresting world that Jodorowsky had crafted. I'm sure Jodorowsky was going for something, but what that something was remains a mystery to me, hidden by laboured storytelling and an excessive run time.

Technically there's skill there, no doubt. I found particular fascination within the soundtrack that Jodorowsky constantly fills with noise despite the barren landscapes. Whether its an army of clucking chickens, gusty winds, mulling goats and the like, the speakers are certainly working overtime when other aspects are not. I got a kick out of the costume design by Jodorowsky himself that I could see had influenced the likes of Tarsem Singh's The Fall. Sadly, I found the film just never went anywhere potent enough to justify its crude stylistic flourishes and disturbing imagery.

The second feature, The Holy Mountain, on the other hand, was an entirely different experience. Dealing with a lot of the same issues as El Topo with its frequently confronting religious imagery and weird segues, I was instantly taken by it unlike its predecessor. The Holy Mountain was, I was surprised to discover, the next feature of Jodorowsky's career. A surprise because it feels like a rapid maturation and major advancement over the sloppy El Topo, but also because it proved that it wasn't just my distinct lack of pharmaceutical aid during the screening of El Topo that made me not enjoy it. The Holy Mountain is an awe-inspiring step for Jodorowsky and one that left me in a constant state of slack-jawed admiration. With its clean, assured direction, phenomenal art direction (truly some of the best I have ever seen), absurd imagery, bonkers descent into comedic oddity, and endlessly fascinating mythology I was entranced by The Holy Mountain. 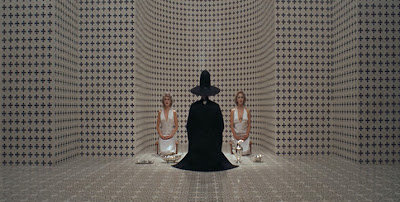 I was disturbed, as one should be, by the very real animal cruelty as well as the questionable prepubescent child nudity and irksome representation of gay figures (all of which were also found within El Topo, and I suspect his later works, too), but at least this third feature of his came accompanied with such a strong, stylistic vision that I found it less troublesome. For the first hour, certainly, I just couldn't keep my eyes off of the screen as Jodorowsky threw dazzling image after dazzling image at me. From the opening scene of a robed man performing a religious act upon two women in a sterile white and black room I was hooked. I don't really know what any of it means, but I was fascinated nonetheless. Pockets of people amongst the audience were chuckling away at the odd imagery - the toad city for instance - but I mostly sat there with my serious face on, soaking it all in. This was powerful stuff and I was determined to not let Jodorowsky's obvious nods to El Topo's pot-headed legacy get in the way. Of course, by the time one character started humping a mountainside, followed by what can only be described as "tiger tits", something in my brain snapped. I ended up cackling for several minutes straight and then at frequent intervals thereafter until the ending. Oh, that ending? Yeah. Wow. I can't even, ya know? I don't even want to know what the director was smoking when he planned out The Holy Mountain. Something dangerous, no doubt. It's of little surprise that John Lennon and Yoko Ono helped finance the picture, also. 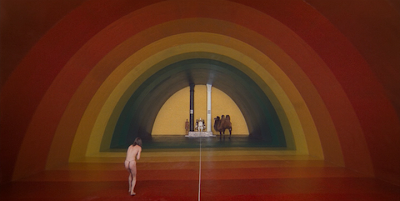 These two films seem like excellent mirrors to any debate about "weird for weirdness' sake". Both are weird, sure, but I found only The Holy Mountain did it in the context of a film with the gravity and the scope to give the impression of having a deeper meaning. In contrast, El Topo felt like little more than shenanigans. Even if I didn't entirely get what it was all about, it's a film of truly epic visual power - visuals that took my breath away - and one that really can't imagine experiencing on a small screen. Thank god The Astor Theatre (once again), hey?
Posted by Glenn Dunks at 3:12 AM

It's been a couple of years since I've watched them but I def. prefer Holy Mountain to El Topo too. I'd watched HM first though, and always wondered if my preference for it was only because it felt fresh and then ET felt derivative, so I'm happy to hear you came to the same conclusion as I did having viewed them the opposite way.

You should see Sante Sangre next, I really liked that one too.

Jodorowsky is a prankster or a Jungian trickster. He has no past (or at least attempts to cloud his past with numerous myths) and this constantly denies any concrete experience or interpretation of his films. Elements of zen buddhism, tarot, psychomagic, catholicism, psychoanalysis and a whole bunch of other interests filter into his films in a strange matrix of presentations.

Especially with something like El Topo, the film is simultaneously symbolic and surface level. Its about myth making and deconstructing, about the search for spiritual enlightenment and the notion that representational texts aren't as simple as being solely a representation of reality.

I think the trick is not to try and read one particular message or perspective. Although he is working in the confines of a Hollywood genre (the Western) it doesn't want you to come away with some clear headed definition of what the films intentions are, because its intentions both don't exist and are endless. You just have to experience the films, try to pull at the threads and tie them together and understand new perspectives for seeing not only films, but reality, politics, religion, etc.

Sorry, I got carried away there haha. The dude's a fucking genius.