The tagline of Warwick Thornton's starling debut feature Samson & Delilah is "True Love" and true love, as they say, is hard work. Being an Australian film you can probably already tell that this story isn't going to be easy, but some the harrowing moments that Thornton puts on screen seem to bring new definition to the phrase "doing it tough". However, the true wonder of this movie is that in spite of the hardships and the troubles that plague these two achingly beautiful characters is that there is indeed true love and it shines brightly.

Samson & Delilah, no connection at all to the biblical tale, has quickly become the buzz title of the Australian film industry and with just cause. It premiered at the Bigpond Adelaide Film Festival only two months ago and has become a word-of-mouth sensation, and just recently was selected for the Un Certain Regard sidebar at Cannes. It really isn't hard at all to see why. 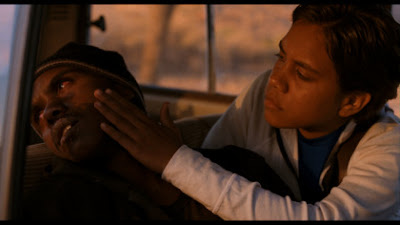 Beginning in a remote outback community, Delilah (Marisa Gibson) lives with her Nana (Gibson's real life Nana Mitjili Gibson) making a small living from selling authentic dot paintings, which unbeknown to them get sold for thousands of dollars in the city. Samson (Rowan MacNamara) lives nearby and has nothing to do except sniff petrol cans and roll around in a wheelchair. Once Nana dies these two souls, seemingly destined for one another from the outset, set off on a road trip that goes from bad to worse to tragic to near-catastrophic. But while this could easily be taken as not being an "easy" film to watch, there is just such authentic humanity and beauty in it, particularly the closing passages, that it will continue to swim through your mind for days and weeks on end. It still swirls around in my mind and I saw it a month ago!

The film works on so many levels. Is it simple a love story? Is it a tragedy about drug addiction? Is it a realistic portrayal of Aboriginal life? Is it a cautionary tale to everyone about their conceptions of people or is it an indictment on this country's treatment of Aboriginal people? It's all of these and more. It's a letter from Thornton to his audience. He wants us to think and feel. He wants us to breathe the same air as these characters and he achieves this with amazing sense of place. Cinematography by Thornton is gorgeous and the simple yet stark production design by Daran Fulham is really great at identifying a strong sense of place. 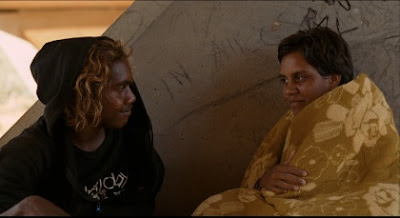 There are scenes in this movie that will, truly and honestly, break your heart. Watch as Delilah tries to sell a dot painting to the white cafe patrons or as she delicately holds a desperate Samson. The performances are quite astonished, particularly that of Marissa Gibson. She barely speaks after the first few scenes - McNamara on the other hand had only one word of dialogue for the entire film if I remember correctly - but evokes so much. Their world is one of silence and yet we can understand so much about it, and that's an incredibly testament to Thornton and his filmmaking partners.

Samson & Delilah is a great piece of filmmaking and one that you will not forget in a hurry and one can only hope that Australians - and, if they get the chance, international - audiences take a chance on it. A
Posted by Glenn Dunks at 10:01 PM

Samson & Delilah has been my most anticipated Aussie film since the moment I heard it was coming. Warwick is fantastic, his shorts have been both moving, human and funny, and I can only hope that it will release in the UK very soon. I hope it kicks arse in Oz, too.