Did you not think there were enough big hats in The Duchess? Did you think Elizabeth: The Golden Age could have done with a bit more frilly lace? Did Becoming Jane's heroine just not rise above society's sexism enough for your liking? Was The Other Boleyn Girl just too much like an episode of Melrose Place with just a lot of big flouncy dresses? Then you may just like The Young Victoria, a new period costume drama as directed by Canadian Jean-Marc Vallée, a man who was probably only hired because his name sounds French and prestigious and, thus, looks impressive on a movie poster. Bless 'em for trying.

The problem with The Young Victoria is that it is exactly the movie you expect it to be. If you have seen the trailers and the ads on the tele ("she's changed the world while wearing puffy sleeves - she deserves your attention!" is what I imagine they say) then you probably will. A lady behind me at my session was shedding tears by films end, which is a sign that the film's orchestral score had done their job for at least one attendee. For me, however, it mostly fails to do anything verging on different. 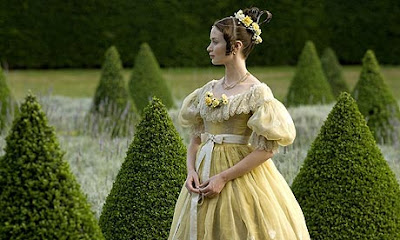 In case you had not figured yet, there is no twist in the title for The Young Victoria. It is not some Marie Antoinette-esque telling of Queen Victoria's story in which she is actually played by someone very old who wears Doc Martins. No, no, Queen Victoria's story of love and loss AND THEN LOVE AGAINOMG!!! is played by the usually quite wonderful Emily Blunt. She is an actress who has proven a strong force on screen and has given performances in films like The Devil Wears Prada and My Summer of Love that have elevated said films. Unfortunately here she is forced to put on a weak girlishness while sporting ridiculous curls in her hair that, I guess, are meant to provide the illusion of her being younger than her 26 years. They do not work. Throughout the entire film she looks exactly the same! Hmmm.

Was anybody else aware that Queen Victoria's life was just like that out of a romance novel? Oh yes. Watch as she DEFIES HER PARENTS! Watch as she begins a SECRET LOVE AFFAIR! Watch as she must STEP OUT FROM THE SHADOW OF MEN THAT SURROUND HER! Watch as she WEARS A GREEN DRESS... ANDTHENABLUEONEOMG!!!

Speaking of the dresses, they are indeed very pretty as designed by Sandy Powell, costume designer extraordinaire. I did, however, get the impression that she just borrowed the costumes from the set of an identical movie. I could have sworn that I'd seen them before! The art direction, too, is quite nice to look at and as unimpressive as Blunt and the rest of the cast is, at least they too are attractive. I'm not sure why the genes in the British royal family mean that once someone fits a certain age their looks just VANISH, but it appears that is the case. Everyone who is young in the royal family is gorgeous, everyone who is older is just soggy and saggy. 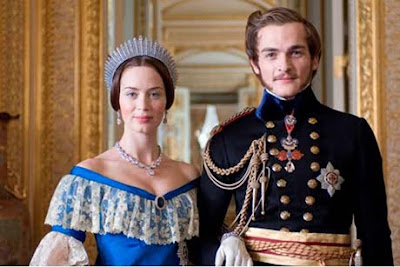 I'm not sure how Vallée made Miranda Richardson uninteresting, but he did. Ala Charlotte Rampling's role in last year's The Duchess, she doesn't have much to do other than stand in doorways and look unimpressed by things. Rupert Friend is okay as the Queen's suitor and it's always nice to see Paul Bettany in something that is not Wimbledon.

As I said before, if you like the look of this movie then, by all means, go along. Martin Scorsese and Sarah "Fergie" Ferguson need your money!! Just don't expect surprises. Or suspense. Or emotional conflict. Or anything remotely resembling a scene in which Queen Victoria yells about having a hurricane within her. If she did then I fear we never got to see it, which is a shame and that generally makes the film a wash. I do want to send out a big piece of praise, however, to Harriet Walter. She was quite excellent in her brief role. Shame the rest of the film couldn't rise to her level. C-
Posted by Glenn Dunks at 10:41 AM

So, no chance for Emily Blunt getting an Oscar nomination here? :)

I certainly hope not. It's a bland, uninteresting performance.

Maybe they'll get something for the costumes at least :)