David Lynch is, perhaps, not the chief person you would think of to inspire an Aussie ghost story, but there it is clear as day right there on the screen. Joel Anderson's debut film, the suspense-filled fright fest called Lake Mungo (for those unaware of Australian geography, it is a real place and holds the key to the film's central mystery). In retrospect I feel like those haunting synethesisers of Angelo Badalamenti's Twin Peaks theme should play over the - very eerie - opening credits. It's actually a shame that the overriding sense of Anderson snatching bits and pieces of Lynch's resume is so obvious because it occasionally distracts from what is a really great movie.

Filmed in the style of a documentary, Lake Mungo traces the story of Australian teenager Alice Palmer who accidentally drowned in a weir while on holiday with her family. Her family believes her ghost is haunting their suburban home and in trying to solve the mystery, they uncover the dark secrets that Alice withheld. The same secrets that, ultimately, cost her her life. The similarities to Twin Peaks are already immense. Throw in paedophiles, hidden video tapes, sexual escapades, supernatural twists, kooky doctors and even a scene in which a man is seen hiding behind a piece of furniture in Alice's bedroom and you've got yourself a sort of mix tape of Lynchian Twin Peaks shenanigans. And I'm not even mentioning the fact that the film's biggest scare is seemingly taking a big ol' page out of the INLAND EMPIRE book. Oh wait, there I go talking about it. I told myself I wouldn't! 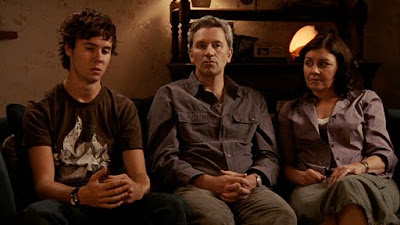 Thankfully though, the film emerges out of these shadows that it creates and succeeds at being a scary little movie that you should try and seek out with its scares that are far more creative than the latest piece of Hollywood pap. It is not jump-out-your-seats-gasping sort of scary (although that did happen to me once, I literally JUMPED OUT OF MY SEAT!) but works with the sort of frights that creep up on you. The emergence of a shadowy figure in the background or the sudden appearance of a figure in the frame. The hairs on the back of neck stood on end and at several moments I found myself cowering in my seat.

While the film owns an obvious debt to David Lynch, there is also a strong element of The Blair Witch Project. From the opening title card and onwards, the film actually makes the faux-documentary structure work for it. Ghosts are always going to be less scary and harder to make work than being alone in the forest with things that go bump in the night, so presenting the film as a documentary, as if it is true and real and not just a story being told by a group of filmmakers, really helps overcome that. Suspension of belief becomes true believing. 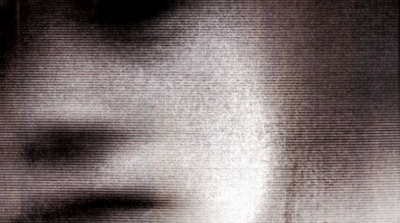 It also helps that the film is so well cast. While Talia Zucker doesn't get much of a chance to shine as the deceased Alice, Rosie Traynor, David Pledger, Chloe Armstrong and Martin Sharpe all work wonderfully, as assorted family and friends of Alice, in letting the viewer believe the situation that is unfolding before their eyes. At one point when I thought the film was beginning to wear out its welcome - a scene at the titular Lake Mungo filmed entirely on a mobile phone camera - it does a complete 180 that results in one of the scariest moments I've seen on screen in a while.

And make sure you stay during the closing credits. Just as with the opening credits, the closers are creepy and have stayed with me. They also made me want to watch the movie again right that second to see if Anderson had been as smart all along as he is implying (you'll see what I mean). And then, again, wait until the very end where the film ends with a flash of eerie imagery, which reminds me to also mention the fantastic cinematography of John Brawley. A documentary-styled movie might not seem like the natural place for fantastic lensing, but some of the images on show here are frightening and deceptive in their simplicity. Lake Mungo is one of the finest and most original scary tales in a long time. B+
Posted by Glenn Dunks at 7:18 AM

You got it. I watched the film some years ago (thanks to you, I the film is so great that I took hours to subtitle it for my mother to see. She loved it). And I still get goosebumps thinking about it. Just checked back to see what you had to say, you being an Aussie and "horror" film devotee. It is not so much a toe-curling scare, more like a story that breaks your heart. At least, that is what remained for me. I work on a study about photography and literature and find it wonderful (and creepy) how the film exploits the old idea of how people being photographed (or filmed, for that matter), leave a bit of themselves (literally, particles) in these photos. As Barthes put it: Every photography is a witness of presence. Dead but there.