Read the rest over at Trespass Mag for which this is my first piece. Hopefully more to come! 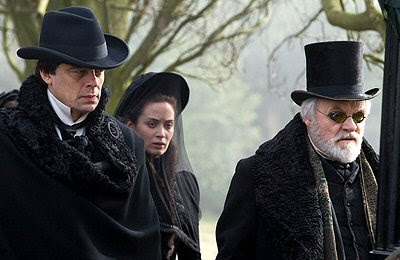 I did want to mention some other stuff though. Word limits can be a blessing or a hindrance and in this case it was the latter. So many awful, awful things to talk about. How about how the sets and the costumes, as pretty as they are, are entirely washed out by the horrible cinematography that makes everything look dank and dark as if they were shooting with only natural light and the only natural light they had was a cigarette lighter. I was so surprised when I saw all of these movie stills since they certainly did not look like in the film.

Or how about the bombastic sound design? It wouldn't have been that bad if The Wolfman wasn't one of those movies that utilises the "boo machine" literally every few minutes. By ten minutes in I had already smartened up to their game. Seriously you guys, the failings of this movie should be written into cinematic lore for all to gawk at for decades to come. F
Posted by Glenn Dunks at 11:59 PM

Agreed - a truly, truly awful film on every level.

I didn't think it was that bad. Certainly not among the worst of filmmaking feats.

I do agree that the lighting was perplexingly dark, putting most legitimately impressive artistic elements in the shadows so that we could barely see them. Judging from the trailer and promotional stills, I bet the film was altered/darkened in post-production during Universal's reworking of (reportedly) the entire project to better fit an accessible horror genre. Boo, corporate Hollywood!

As for the "holes" in the plot that you discuss... I think they got away with using Del Toro by casting a Hispanic-looking actress to play his mother in the flashback scenes. Perhaps she and Hopkins would have made an unlikely pair, but at least the math made sense. I gave the film the benefit of the doubt that the different phases of the moon were occurring on different nights (though the way the film was haphazardly squished together, it was admittedly difficult to tell). The waterfall in the English countryside makes sense though. They explicitly defined the setting as the "moors"-- where "Wuthering Heights" famously took place and where there is indeed a varied landscape of cliffs, bluffs, forests, rivers, and (sure why not?) waterfalls. Like "Pride & Prejudice," only a century or so later.