What is it about claymation directors that brings out the creepiest, oddest and downright strangest in the animated form. Whether it be the all-singing all-dancing Halloween celebrations of Henry Selick or the moons made out of cheese and evil penguins of the Aardman Studios’ Wallace & Gromit creations or any number of other contenders for the status as the most imaginative and ghastly claymation images. Adam Elliot’s Oscar-winning short Harvey Krumpet had its fair share of eccentricities going for it, too, and that continues with the release of his first ever feature film, Mary and Max.

In this film some of the crazy and crazier images on display are suicidal goldfish, birthmarks that “look like poo”, alcoholic kleptomaniacs, Asperger's syndrome sufferers with weight problems and gay pen pals. You can’t accuse Elliot of not shoving his entire imagination into this project, at times to his detriment, but as a wildly inventive and original piece of Australian cinema Mary and Max is a winner.

Taking place decades before today, Mary is a lonely young girl who lives in the Melbourne suburb of Glen Waverley (hey, I’ve been there!) who admires The Dinkles, an animated kids television series of brown blobs, and eating sweetened condensed milk. On a whim she writes to the first name she points to in a New York City phone book – cue a funny joke about Jewish people that it’s okay to laugh at - and that man just happens to be Max, an obese man with Aspergers Syndrome who attends Eaters Anonymous meetings and also watches The Dinkles. These tangible threads of commonality actually bring these two lost and lonely characters together in a much more believable fashion than you may expect.

The true magic of Mary and Max is that in between hearty guffaws and brilliant sight gags is that there is true poignancy to it. These two characters, especially Mary – voiced as a child by Bethany Whitmore and as an adult by Toni Collette – who represents so many different feelings associated with potential young audiences that it’s hard not to be touched by her tale. Max, as voiced by Phillip Seymour Hoffman, is an equally miserable character but is surprisingly endearing because of it. His afflictions and addictions are handled with care and the scene in which he rattles off the conditions of Asperger's has genuine emotion as a man who still hasn’t come to terms with what hand he has been dealt, and yet has become so disconnected and desensitised from everything that he just doesn’t care what people think.

The humour, dark and silly, comes thick and fast during the opening 30 minutes especially with Barry Humphries supplying plenty of it with his droll narration alongside the assorted weird and wonderful gags on view. It’s an easy film to find yourself missing jokes as they creep up on the audience so sneakily and some of them being so dark that it takes a moment to realise the joke actually happened.

Unfortunately, Elliot's experience in the short form of animation proves to be a problem during the final act of this 80-minute movie. The film has such a rapid pace at times – like a short – that when it slows down these moments feel awkward and the forward moving story grinds to a halt. The jokes seem to stop, too, which wouldn’t be a worry if the early portions of the film had not have been so entertaining and funny. There were real moments of heart spread throughout Mary and Max that when Elliot decides to make a big moment out of them they come off as forced, which is incredibly unfortunate. 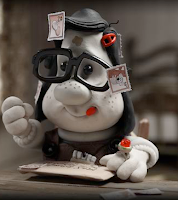 However, even when these hiccups disrupt a free-flowing story, the animation remains beautiful to watch. Elliot’s character designs are fabulous – this writer’s favourite being Mary’s lush of a mother Vera, voiced by famous Melbourne singer Renee Geyer – and the art direction is utterly captivating. The New York scenes are wonderfully detailed and the Australian parts have such a true sense of Australiana that beats most live action movies easily.

As something truly fresh and original though, Mary and Max is a triumph and it’s just a shame that the glorious joy-in-sadness that the film had revelled in had to be detracted by outright sadness towards the end. B
Posted by Glenn Dunks at 9:00 PM

When does it open in Aus...or has it?

PS: My dad lived in Glen Waverly too ;)