Killing Horror One Film at a Time

Horror as a viable genre at the Australian box office, it would appear, is dead. Oh sure, Paranormal Activity 4 will make some great cash and any high profile franchise release will see at least some coin in the coffers based on brand name alone, but original titles appear to dropping left, right and centre down this end of the globe and it has officially reached its nadir with the news that Drew Goddard's The Cabin in the Woods will be bypassing cinemas and head direct-to-DVD (I think first officially noted by @popcornjunkies on Twitter and confirmed on the Roadshow Tumblr). There has always been far more horror titles premiering on home entertainment than in cinemas anyway, the same could be said for film in general, but 2012 appears to have met a curious resistance to the genre that just highlights this country's rather ho-hum relationship with horror fare. 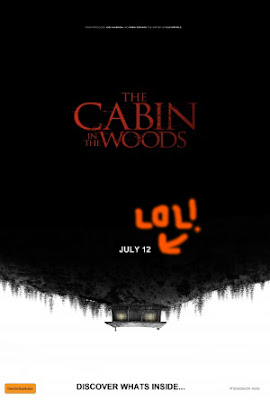 This year has been very quiet for scary pictures, especially since the dryer months at the start of the year are a perfect playground for these films to appear as if out of nowhere and scare up a few million at the box office thanks to patrons eager for a fright. Earlier this year though not even an American opening weekend haul of over $30mil could get the ball rolling for that film's local release. I saw that rather turgid religious horror flick essentially all by myself and the film opened to little more than $700,000 (which would equate to a $7m opening in the USA). Ti West's The Innkeepers will find itself on one screen across the entire country when it's released exclusively the Cinema Nova in Melbourne on 31 May, Ben Wheatley's Kill List went direct-to-DVD earlier this year, and now Cabin in the Woods is going that way too. A specific release date hasn't been announced, but it certainly won't be until after the film's US DVD release. Not that that will help any since people are going to illegally download it anyway. The distributor, Roadshow, did the same thing with GrindHouse several years ago and that resulted in Death Proof disappointing at the box office and Planet Terror never seeing the light of a movie cinema apart from the one local movie house (oh hai The Astor Theatre in St Kilda) that screens the original unedited edition. Last year the vampire flick Stake Land and Spanish home invasion thriller Kidnapped also received one-screen released despite potential for wider appeal. Meanwhile, I think it's already been confirmed that Piranha 3DD will be going Direct-to-DVD after disappointing receipts from the original. I can only hope there's a 3D Blu-ray released.

What does it all mean? Well, horror has never been a particularly bountiful genre at the box office. Despite what all the Aussie film industry nodding heads would have us believe, horror is not the saviour people think it is. As I said before, name recognition will get you so far, but success in America for a scary genre title does not always correlate to success in Australia. Still, with Joss Whedon's name tacked onto all the marketing (he is the screenwriter after all) and a cast that includes Thor himself, Chris Hemsworth (or should that be "Our Chris Hemsworth" since he's an Aussie to boot), one would think they could release it theatrically in some capacity. Does their name not mean any value or marketing muscle whatsoever? Even an ultra quiet release like the one bequeathed to Haywire from the same distributor, that saw that Steven Soderbergh film screening at early mornings in mostly non-metro cinemas. Anything, really, to be able to see the film the way it should be. At this stage it appears only those attending the Gold Coast Film Festival screenings of Cabin will get to see it in a cinema, which is a damned shame. When fundie lobbyists with "wholesome" "family friendly" agendas aren't trying to get horror films banned we have distributors apparently doing their best to sabotage them. What fun it is.

Maybe Roadshow will hold off on the DVD release until it's been able to screen at Sydney and Melbourne film festivals later in the year? It's certainly a possibility worth considering. Maybe the distributor just has too much on their plate to juggle the release of a film that most people acknowledge won't have terrible wide mass appeal. Maybe, maybe, maybe. I'm sure the US blu-ray (and, hey, even the novelisation!) will have to suffice for any desperate potential paying customers.
Posted by Glenn Dunks at 2:57 AM

I have to admit I'm not a fan of horror, BUT I was definitely going to see Cabin at the movies. So disappointed when I heard this today, and I hope that Roadshow will change their minds about this decision.

Roadshow's Facebook is getting bombarded tonight, but they are adamant, they even have someone commenting late into the night.

I don't even consider this a true horror movie, with Joss in charge and the added twist, there is still more SF in there than just plain horror.

The list was going to be:
Avengers
Cabin in the Woods
Prometheus
Dark Knight Rises

Guess I'm only watching 3 movies this year. If 3 Stooges makes the theatres when Cabin doesn't, I may start a riot.

Sure The Cabin in the Woods US and European returns haven't been spectacular but surely even a limited release with a short lead in to the DVD would at least distinguish it from the majority of direct to DVD crud that comes out each week.

I think horror or genre films have been dead for years. Through the 1970/80s to today, including The Loved Ones, Road Train and Red Hill, the box-office returns have been poor and i think the last great success was Mad Max. Obviosuly Wolf Creek did well, but that was more in part due to the controversy than an interest in genre films.