May the Force of Mickey Rooney be With You 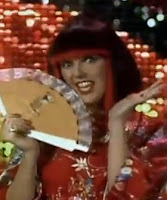 Have you seen the newly released teaser trailer for DreamWorks' Kung Fu Panda 2? I wasn't a fan of the first one so I doubt I'll bother with another serving, but as I watched the teaser (below) I couldn't help but be reminded of one of the strangest aspects of 1980s music. Did people not find it terribly inappropriate for so many songs to utilise Asian culture in a comedic way? There's only so many mandolins and gongs that can be inserted into a song before it becomes apparent they're just taking the piss, right?

The trailer for Kung Fu Panda 2 uses a catchphrase of "We Will Wok You" and, well, is that any worse of a pillage from Asian culture than any of the songs I've included below (at least one of which is actually very incredible, the rest not so much) in its use of Asian culture for yuk yuks? Some of these videos truly have to be seen to be believed. The Aneka ones are just WOW, aren't they? Your eyes are guaranteed to bug out of your skull at the sheer audacity of it. 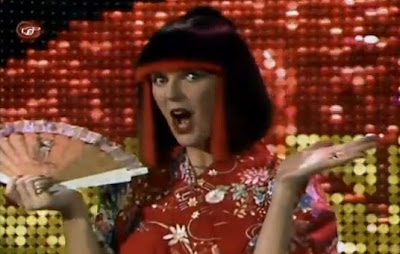 Meanwhile, does anybody see this and just think of Geena Riley doing an amazing sketch on Fast Forward? The entire video plays like one big gag as it is!

Let's end this little foray by jumping forward a decade and a half from when Cyndi Lauper had a hole in her heart that went all to China, to when Madonna finally caught up and started to use Japanese iconography. Most notably, of course, was her "Nothing Really Matters" video, which is a great clip for a great song. Oh sure, I don't know why Madonna's wearing a rubber kimono why cradling a baby, but why question it?