1st of July (But No Fireworks)

It's the 1st of July, half way through the year (a frightening thought), so I thought I'd take a look at the music that have defined my first six months of the year. Did you notice the Kelis reference in the title there? I am so smart. S-M-A-T.

The following songs have all had their moment in the sun on my iPod where I have listened to them on repeat. That is very literally the case with some of the songs on here, which have clocked up so many repetitive spins that I almost grew tired of them due to so many listens. Almost. The honour for "song the year" is definitely, at this stage, a fight between Groove Armada's "Paper Romance", Sophie Ellis-Bextor's "Bittersweet" and Scissor Sisters' "Invisible Light". Although there are several songs that could make a play for the title if I have a sudden change of heart.

Sophie Ellis-Bextor, "Bittersweet [Freemason's Extended Mix]" - Play it loud! Just a pure, unadulterated dance floor orgasm.
Kylie Minogue, "Aphrodite Megamix" - If I had to choose my favourite track from Aphrodite it would be "Too Much", but this megamix featuring several songs from the album is just incredible and was the only thing I listened to for about four days straight.


Scissor Sisters, "Invisible Light" - One of the most euphoric tracks you're ever likely to hear, even ripping of Michael Jackson's "Thriller" is a bonza movie. It is, however, that final minute and 33 seconds that I wish would go on for hours.
M.I.A., "XXXO" - It was this for "Meds & Feds" from M.I.A.'s new album /\/\/\Y/\ for best in show honours, but went with "XXXO" for it's lyric about Quentin Tarantino.


Groove Armada, "Paper Romance" - A total stormer, and an unexpected one at that.
Kelly Rowland, "Commander" - The sub-subgenre that I like to say "Last Night a DJ Saved My Life Dance Floor Anthems" found a new eternal classic in Kelly Rowland's "Commander". Play it long, play it loud.


Gabriella Cilmi, "On a Mission" - The first song from 2010 to mustre up over 100 listens on my iTunes, fact. It helped that at the time I had limited access to new music, but it's nevertheless an incredible track.
Robyn, "Dancing on My Own" - Crying while dancing is a term used to describe dance songs that deal with themes of loss and woe. This is one of those songs and it is good. So good that one might actually find themselves breaking out a tear if you're really in the zone of the themes.


Ou Est Le Swimming Pool, "Dance the Way I Feel" - Those synths! THOSE BLOODY SYNTHS! Looking forward to the album in August. Have you actually watched the video? It's like Empire of the Sun directed by David Lynch on a break from INLAND EMPIRE. Fluorescent and a bit frightening.
Kelis, "Acapella" - I wanted to include "22nd Century" but apparently Kelis and her record company don't want any marketing for songs that haven't been released as singles and have deleted any knowledge of the song from YouTube. Oh well, "Acapella" is good, too, but "22nd Century" with its extended breakdown in the middle is just glorious and rivals "Invisible Light" as the single musical highlight of the year so far.


Fantasia, "Even Angels" - I adore Fantasia and "Even Angels" was a spectacular modern day R&B song that barely anybody noticed. At least Guy Lodge agrees with me.
Kele, "Rise" - The highlight of Kele's impressive solo album debut, The Boxer.


Christina Aguilera, "Little Dreamer" - Very much a case of an artist, shockingly, leaving perhaps the best song she's ever recorded off an album and making it a "bonus track". Just like Britney Spears' "Quicksand", actually. "Little Dreamer" is a bit classier than that song, which is something Xtina's Bionic could have used.
Paula Seling & Ovi, "Playing with Fire" - Romania's Eurovision entry, lest we forget. It's still great. 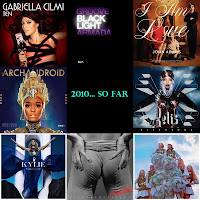 As for albums? Well, there are obvious contenders such as Scissor Sisters' Night Work, Groove Armada's Black Light, Janelle Monae's The ArchAndroid, Kylie Minogue's Aphrodite, Kelis' Flesh Tone, Sleigh Bells' Treats, Gabriella Cilmi's Ten and John Adams' compilation on the I Am Love soundtrack that will be definite end of year fixtures.

But there have been some other fine albums from the year. How about M.I.A.'s /\/\/\Y/\, Kele's The Boxer, Marina and the Diamonds' The Family Jewels, the Twilight: Eclipse soundtrack, Robyn's Body Talk, Part I (looking forward to parts 2 and 3 throughout the year), Violent Soho's Violent Soho, Nobody's Daughter by Hole, Acolyte by Delphic and the weird David Byrne/Fatboy Slim concept album about Imelda Marcos, Here Lies Love. They will all be worth remembering and re-evaluating at the end of the year to see how they have held up amongst the other titles listed above.

Since writing this I have discovered the new Chemical Brothers album, Further, as well as Cossus Snufsigalonica by Fear of Tigers. The latter of which is particularly astonishing.

And if you're going to reply with suggestions, feel free, just beware that I will delete any that suggest mopey male singers who play the guitar. That is not accepted at this blog!
Posted by Glenn Dunks at 10:16 AM