During the 2008/09 awards season in America the biggest story was that of Danny Boyle's Slumdog Millionaire. The film, as we are all aware, won Best Picture, but the story goes that the film was, before its very successful screening at the Toronto International Film Festival, going to direct-to-DVD.

What does this have to do with anything? Well, word has filtered through - and spread throughout the Aussie cinephile universe like a wildfire - that Kathryn Bigelow's inredible acclaimed Iraq war drama The Hurt Locker is going... wait for it... DIRECT-TO-DVD!(!!! - because one exclamation point is just not enough.) The story goes that Village Roadshow, one of this nation's most prominant film distributors (and a cinema chain in its own right) has withdrawn the film's October release date, even after holding media screenings for critics, and will indeed release the film as a direct-to-DVD title alongside such illustrious classics as Love and Sex 101, I Hate Valentine's Day and The Grudge 3. 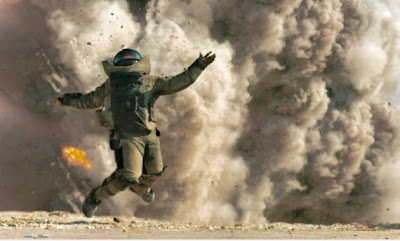 Interestingly, this shocking development comes just weeks after Aussie - and fellow Iraq-theme film Three Blind Mice all but failed to secure distribution around the country. Of course that movie wasn't as obviously a "war movie" as The Hurt Locker is, but it stands to reason that the moment the plot description was read by cinema owners they immediately turned it down. While I wasn't quite as fond of Locker as that one - it sits comfortably as a B+ movie for me by the way - it sure is a great piece of CINEMA and deserves to be seen in that environment. The Iraq war has proven to be an even bigger poison to films here than it has in the USA. Katherine Pierce's Stoploss earned only $976 on each of its 82 cinemas last August (src).

Clearly Village Roadshow do not see any financial gain in releasing Bigelow's film theatrically, which is such a shame. I am so glad I saw this at MIFF instead of waiting for the cinema release that I asumed was inevitable. What's going to happen when the film - possibly, maybe, perhaps, probably - receives Oscar nominations next February and people ask "a movie that went direct-to-DVD is up for Oscars?" Just gives us another reason to root for Bigelow and her movie.

Now, nothing appears to be confirmed, but people "in the know" seem to be confident that it is true. That's a horrifying prospect isn't it? And, to think, a google of "hurt locker village roadshow" brings up search results showing that the film is playing in the newly costructed American "Gold Class" cinemas in cities such as Seattle. They get it GOLD CLASS and we get it on a 56" screen with poor sound quality (wasn't the sound on that movie just bombastic?) Let's hope it all proves to be a ridiculous rumour that never eventuates.

More info on this story as it comes about.
Posted by Glenn Dunks at 6:20 AM

I fucking hate it when major distributors pick up these gems of films and release them straight to DVD. Why don't they leave it for the independent distributors to pick them up but, no, they gotta have them all. Fuck Roadshow! They are ruining cinema.

Its good to find some place other than Brazil that has crazy release patterns: The Hurt Locker went straight to DVD here in April.

For what it's worth - and I know it's not worth much - the film is still listed on Roadshow's website as having a 22 October Release. It will be very disappointing if it doesn't get a cinema release. It has been widely lauded from its MIFF screenings - it was one of my top 3 films at the festival.

and now its been nominated for 9 (nine!!) academy awards... smooth moove, village roadshow!