Bran Nue Dae are three words, entirely misspelt, that will, if all pans out, be on the tip of your tongue in 2010. Known to some already as a hit stage show by Jimmy Chi from 1989, director Rachel Perkins has adapted this Aboriginal musical into a film, and it is one that is bound to appeal to audience members of all ages. Bran Nue Dae screened at the Melbourne International Film Festival to rousing applause and won the audience award for Best Film – for good reason too. It looks great, sounds great and features some scene-stealing work by some of this country’s finest actors. 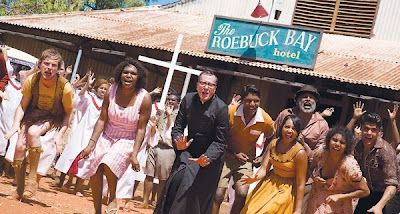 To read the rest then head over to Onya Magazine, a website dedicated to discussions of Australian content.
Posted by Glenn Dunks at 9:15 PM

You are kidding. Face it. It missed the mark. Thank god for Samson and Delilah so the world can see Indigenous film making for what it can be - exiting, exacting and hard hittin -not plastic and contrived like Bran Nue Dae.

Ugh. Anonymous people are always the snarky ones.

So you're saying all indigenous filmmaking needs to be the same serious kind like Samson & Delilah? That's just silly. And considering the director, Rachel Perkins, is aboriginal I would think she'd have a good idea of what "indigenous film making" can be and can do. Sometimes aboriginal people don't ACTUALLY live tragedy-filled lives and I don't see a problem with portraying that on screen. Bran Nue Dae and Stone Bros are further examples of what indigenous filmmakers and indigenous films can do.

I saw both the play and the movie too. The movie failed to give the mix of hard truths and humor the play had. The play broke new ground. the movie is derivative and facile. The reviews almost unanimously agree. Glenn dunks is patronizing. And I'll stay be anonymous too because the patronizing army of Glenn's ilk will attack whoever criticizes an Aboriginal film. It is the stuff of glass ceilings when the play had already broken free of that by being a mainstream success. The movie is not a mainstream success and bombed at Toronto so it is unlikely to make it in arthouse either. Loke Anonymous said - 'face it' and move on.

In fact, the film won the audience award at MIFF so it's clearly very well-liked.

Glenn is right not all movies have to be exacting and hard hitting. some movies like this are meant to be light hearted and entertaining which this is.Saw the original play and loved it this is different and loved it movies don't always have to be a direct copy of play they can be interpreted.The original playright Jimmy Chi loved the adaptation so who is wrong?
Scott

Loved the movie and thought Rachel Perkins did a wonderful job! I like my Indigenous films to be fresh and entertaining and sometimes we can get a bit tired of the "poor bullah me" stories. Aboriginal films are not just made for white people, we are allowed to be entertained too and even in our own way :)

Yes this film was light and fluffy, but it was entertaining and it did touch (albeit lightly) on Aboriginal issues such as deaths in custody, alcholism, unemployment and homelessness....I walked out of the theatre happy and optimistic...and that's good.