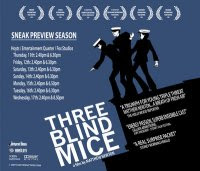 And as an AFI member myself - alas, I am only allowed to vote for Best Film, Best Documentary and the short film categories - it really hurts me to quite blatantly mock the institution that I pay good hard-earned money for, but it still continues to boggle the mind that Matthew Newton's astoundingly good Three Blind Mice didn't get a single nomination for this year's AFI Awards. Won't it be embarassing when (and I really do hope it's a matter of "when" not "if") Three Blind Mice becomes an international festival hit and it didn't get a single nomination here? Oh wait... what's that...?

Silly me, turns out that's already happening! I was so excited today to see that the film has won (via) the FIPRESCI International Critics Prize at the London Film Festival. Shocking. A good movie (nay, a great movie) actually winning prizes. It's times like that that remembering Hey Hey It's Esther Blueburger and The Tender Hook scored nine AFI nominations between them really hurts. Newton's film is sure to be remembered longer and more fondly than either of those films, yet because - one has to assume - Newton isn't the most popular guy on the block these days he gets snubbed for movies that are nothing more than turgid dull-as-dishwater Mean Girls ripoffs. 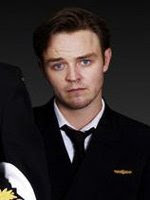 The only solution I can think of is that Matthew Newton ditch Australia and head overseas to make any future products. It's quite obvious that the "people who matter" don't care for him and, at least, he would be appreciated overseas. Isn't that the Australian thing to do anyway? And this time the media wouldn't be able to persecute him for "ditching" Australia because, clearly, they ditched him a long time ago. And then, five or ten years in the future when people are scratching their heads as to where all the talent went from the Aussie film industry (or, hell, next year!) they can put the blame squarely at their own feet because they decided to dig for trash instead of taking the treasure that was staring them right in the face.

Also, in a much less mean-spirited but similarly-themed add-on, I must mention that Steve Jacobs' upcoming Aussie film Disgrace won the same prize at the Toronto International Film Festival so things are perhaps actually looking on the up!
Posted by Glenn Dunks at 5:27 AM

I'm sorry, but... what?! Since I'm not a local, I have no idea what the workings of the AFI Awards are, but this would be one of the best films of the year from ANY country. Do they regularly drop the ball like this?

I maintain that Matthew Newton and Gracie Otto are going on to big things. My predictions like these don't always pan out, but I remember watching "Two Hands" when it came out and thinking, "Hmm, that guy has something..."

Indeed it is true. Very very sad, but true. I haven't read a single negative review about the film, but it's true that Newton isn't well liked down here (google him and "brooke satchwell" if you would like to know part of the reason - but I also suspect it has to do with his father being one of this countries most popular men) I linked to my post about the AFI nominations where I also wrote about it.

It happens more regularly that the great films will get nominated and then passed over for more crowd-pleasing fare, but we honestly don't produce that many films a year and usually only a half of the eligible films get a nomination of any kind, so there's no reason - other than annoying "i don't like him" sentimentality - why it shouldn't have gotten ANYTHING. A best original screenplay spot seemed a given. Alas, they went with Hey Hey It's Esther Blueburger instead, which is like receiving a piece of tough gritty sandwich steak when you asked for the filet mignon on a bed of roasted potatoes and pumpkin with rosemary jus, a glass of wine and a million dollars on the side.

I should also mention that a lot of the time if a well-liked movie misses out it can usually be placed in the "ooh that was just a little bit too different, if you know what I mean" pile. But that doesn't explain Three Blind Mice at all.

why can't you vote in the other categories?

I smell a conspiracy. How could Blueberger ever be nominated for best script?

The AFI is open for membership to anybody and they're allowed to see all the eligible films and vote for Best Film, Best Documentary, Best Short Film and Best Animation Short, but the only people able to nominate and vote for categories like writing and directing and all the technical categories are professional members. As in cinematographers vote for the cinematography award and directors vote for the best director prize.

I'm surprised you didn't mention anything about that poster, Glenn. I hadn't seen it until now, and think it looks great.

Paul, I would have if I had a larger version of it. Alas I only have a tiny one.

And who votes for best screenplay!? Our turgid writer-directors no doubt. Weird then that if everyone could pick best film that the director category just HAPPENS to line up, even though it could only be picked by half. If the best film of all time voting mechanism was faulty, why not this too.