Okay, I just... aaagh! Look, I know a lot of females in Hollywood are skinny and I'm sure a lot of them are in fact anorexic or bulemic or whatever new name it has, but - OMGHOWSHOCKING - could some of them actually be naturally thin? OMG, right? Like it's inconceivable that there are people in this world who aren't overweight! Who can, for instance, eat a bowl of pasta and not have "aftermath" pictures of it splashed on blogs claiming they're disgusting fat pigs (or pregnant!)

Look, I am what they call an "ectomorph". It's very hard for me to gain weight, whether that be fat or muscle. I've been within the same five-kilo radius for many years and I've been clinically underweight my entire life (my "body mass index" or whatever it's called tells me that) - omg you can see my collar bone, I should enter into an anorexic rehab clinic!!!! I know plenty of girls who are naturally skinny too, but you know what? THEY'RE NOT ANOREXIC! They're just thin. They're like me. I can eat more than a lot of overweight people, but that still doesn't mean I gain a kilo for longer than an hour and then it's gone. 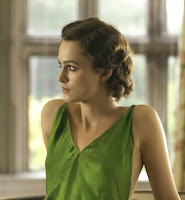 And that brings me to Keira Knightley. Keira Keira Keira. I love my Keira, I do. Since seeing Atonement I have been telling people that I am "forever in the rapture of Keira Knightley" (sounds poetic, right?) and when she goes around saying she got her Golden Globe nomination news the morning she had a killer hangover just makes me love her more.

And you know what? I'm sure there are times where she has been skinnier than she should be (I am thinking of that Pirates 2 premier and the gold dress), but why do people continue to blather on about her being anorexic. There was one time I got really sick and none of my clothes fit me because I lost so much weight in such a short amount of time (I went on holiday, came back a week later having to gold my pants up!) I wasn't making myself vomit I was just dreadfully ill!

She's never been like Lindsay Lohan whose weight has fluctuated. She's never been like Nicole Ritchie whose weight rapidly sunk to miniscule levels. She's always said she's naturally thin, and considering the path she seems to be taking in her career and the fact that she doesn't live in Los Angeles begs the question of why she would be anorexic. The Brits like a few extra pounds on their gals from the looks of it. And, yes, I'm sure there are plenty of photos out there that make her look ghastly underweight, but I'm sure there's a few photos of you that make you look like a fright, too. Photographs can be tricky, you know!

So, look, I'm sorry a lot of people actually have to manage their weight and don't have the freedom to be skinny all the time, but that doesn't mean you need to - effectively - abuse, mock and slander those of us who don't. Okay. Thanks. That is all. I just needed to get this off my (skinny-but-not-anorexic) chest. 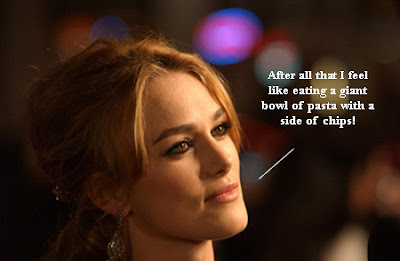 I used to think I was somewhat of an ectomorph, too, cause I was always quite skinny, but I have filled out a bit as a young adult and can get quite flabby in the stomach when I'm not working out. But good for me, I think, cause I'm so tall (and generally thin) that I think I look quite disportional sometimes, and that little bit of extra weight is welcome. I suppose I could gain a fair amount of muscle if I tried (I've had periods where I've been quite into that), so go me, I guess. I should get on that.

I'm so glad I love food, though. It would suck to be anorexic. Sometimes I actually envy women whose body goal is simply to be thin - I mean, not eating is just so easy and CHEAP - compared to going to the gym all the time and lifting extroardinary amounts of weight, and drinking power shakes, and whatnot. But then I come to my senses and thank the gods that I'm not anorexic, and have a metabolism that makes that okay.

I can gain muscle, it just takes way more effort than people who have more to work with (if you know what I mean).

'm probably being both paranoid and a total megalomaniac, but this isn't because I said she had an "anorexic-bulldog's" face is it? Cuz I meant the bulldog which she resembled would have to be anorexic, not actually that she herself was anorexic. Are there ectomorph-bulldogs? Maybe I should've said that. Or maybe I should just shut up now.

I saw your little anorexic-bulldog comment, but no it was in response to another blog that I'm not even going to mention.

That's what I've been saying for years! Jesus!