Rush to the Waxworks

I feel like I've seen the trailer for Rush ahead of every single new release movie from the last six months. You know the one? The one that shows you every.single.beat. of the trailer. I know it's based on a true story and like, say, adapting a book, complaining about what happens is a bit silly. Still, there's surprises to be had in the form of narrative and storytelling decisions that the trailer gives away - marriage, himboism, courage, etc etc, everything. It's frustrating and makes me want to not see the film. Well, not see it even more than I already did. Let's face it, a Ron Howard grand prix film is probably not on my nor your must see lists.

However, the trailer for all its fault at least makes the film look like not-a-comedy. This Spanish poster, however, I can't say the same: 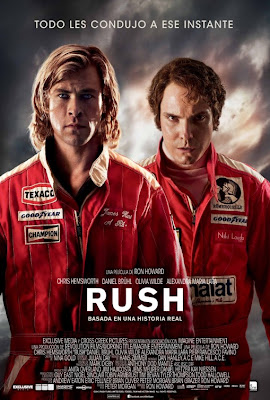 Yikes. They look like they ventured out from a wax museum in the Uncanny Valley. They'd fit right in in this Los Angeles wax museum that's become a bit of a viral LOL factory. It's quite clearly just the heads of Hemsworth and Bruhl pasted onto the bodies of random body models, but why do the faces look so fake and plastic? They look like cyborgs lined up to annihilate mankind. Come to think of it, as loathed as I am to suggest it since he already has one major franchise to his name, but wouldn't Liam Hemsworth make a good new Terminator? I think we'd all like to see him recreate that robot entrance, yes?

See how distracted I have already gotten about this movie? Not even a pretty terrible piece of doctored poster work can keep be interested about a Ron Howard movie, least of all one about car racing. No thanks. I do like, however, that they were able to cram so much product placement into this one poster. Well done to whoever fostered that deal. The lone aspect of this poster that I can respect.
Posted by Glenn at 12:57 AM