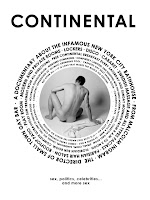 “In order to be successful, you either have to create a desire, or fulfil a need”, says Continental bath owner Steve Ostrow in writer/director Malcolm Ingram’s third homo-centric documentary Continental (after Small Town Gay Bar and Bear Nation). “In this case, it was doing both.” The latest in a recently extended line of documentaries examining less mainstream elements of gay culture history – I Am Divine and Before You Know It are two others to came out of this year’s SXSW festival – Continental is a conventionally assembled, but briskly entertaining recounting of how what is now considered a hush-hush underground aspect of gay life was at one time an open secret and hive of activity. It gave birth to the fame of Bette Midler and Barry Manilow alongside allowing New York gay men an outlet for their sexuality that society was determined to supress.


Read the rest at Glenn Dunks.com

And in case you're not aware, I am posting more reviews online at Quickflix and Junkee, which are accessible at their website or at my own (linked above)
Posted by Glenn at 12:55 PM