Today, over at The Film Experience, I look at Cyndi Lauper's win at last night's Tony Awards and what it means for her chances of claiming the EGOT. Basically, she's close if only she'd embrace writing songs for film more often than not. I think she could easily win an Oscar and complete the quad of entertainment industry awards, but she needs to try a bit harder than stuff like (the admittedly very awesome, but so not Oscar material) "Hole in My Heart (All the Way to China)" from Lauper's only attempt at leading lady status, Vibes.


Gosh, watching that music video is rather scary, isn't it? I have no idea what Vibes is all about from watching it, but I suspect there's a lot of racist representations of Asian culture. I'm not surprised to read that Cyndi was a bit embarrassed by the whole and stopped performing it until audiences in (where else?) Australia were so insistent. The song was a hit here and New Zealand and nowhere else, but considered a well-known under-appreciated gem by fans.

Speaking of the Tony Awards though, I definitely think my favourite part of the ceremony (which, just by the way, is the breeziest award show around, especially with Neil Patrick Harris at the helm) was the musical number as performed by Harris, Megan Hilty, Andrew Rannells, and Laura Benanti in an ode to Broadway stars and their cancelled television series. Smash, The New Normal, and Go On respectively. Take a look and try not to agree with me.


Okay, so if you said the opening number or the Pippin performance were better then I wouldn't argue. I would if you said the Matilda one was, though. That performance was meant to get me into the theatre, wasn't  it? Yikes. I still love this moment there with its trifecta of NBC stars on stage at a CBS-affiliated award show singing about the hardships of being on series that networks consider the runt of the litter. All four performers were amazing, although Benanti's drunken taken on "The Ladies Who Lunch" was a particularly hoot - "both my shows were cancelled, it's true / no show (hah hah), not one show, but two!" -  and, yes, Andrew Rannells (a Grammy winner already, maybe he's on his way to EGOT thirty years down the line if he keeps doing theatre, television, and film) was looking majorly dapper. That had nothing to do with my enjoyment of the piece though. No, none at all. What? Stop looking at me like that. 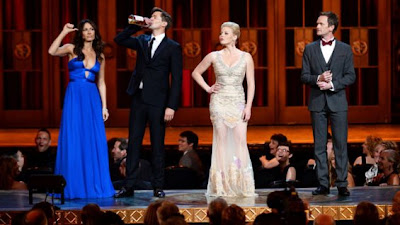 Sidebar - how strange was it that multiple Smash cast-members were in the front row? Good on the theatre community for not shunning them and the series that at least attempted to bring Broadway to audiences on more than one night a year. Cheers all 'round, I say.