Five Observations About the Trailer for Insidious: Chapter 2

I was a big fan of James Wan's original Insidious. I thought it did a lot of things right that so many similar films do wrong - for instance, it had a score that was incredibly effective, and it rather easily got around the whole haunted house issue of "well, why don't you just leave?" - but it did have its problems. I just watched the trailer for Insidious: Chapter 2 and here's some thoughts.


1. Wait, didn't somebody die at the end of the original Insidious? I could've sworn they did.

2. Hopefully the success of the original convinced the financiers to give Wan enough money to actually make a third act that isn't just set in a black room with some floating sheets and dry ice. Hopefully.

3. I'm never much a fan of scary children, but I'm totally okay with children that make evil circle them. Because children are evil. Some of the mystery figures that populate this trailer look creepy as all get out and I can't wait. Gas masks are never not scary, you know?

4. Nice to see Barbara Hershey's same face is still on there. That's a sequel we do not need.

5. Friday the 13th, you guys! Always a solid excuse to watch a stretch of horror films at a time. Also, despite having seen several horror movies already at the cinema since moving to America (way more than I had in Australia in recent times since, as I've mentioned before, they so rarely get released there) none were on opening night. I'm thinking a trip to go see Insidious: Chapter 2 on Friday the 13th is definitely on the cards. I hope it's mad like the opening scene of Scream 2. Just, you know, without all the chop chop. 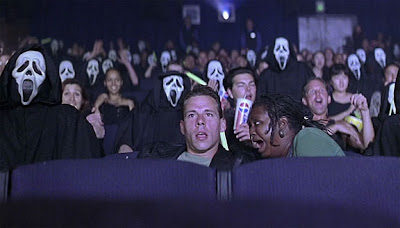