It was just last month that we were discussing the festival sales poster for Greg McLean's Wolf Creek 2 blatantly ripping off the design of the Evil Dead remake from earlier in the year (not to mention the earlier startling reappropriation of the Prom Night poster in the design for Patrick remake). Well, now another high profile horror flick has gone and unashamedly mimicked another film's poster for their own game. This poster for Maniac, which is finally getting a release even though it feels like it's been around for years, is so obviously trying to replicate Drive that the mind boggles.

This time it's even stranger though, since I had already commented in my Maniac review that the film's opening scene seems to have been lifted beat for beat from that of Drive. The bass-heavy soundtrack, the night-time Los Angeles car cruising, and the heavily stylised European look were so glaringly obvious that it was downright off-putting (much like a lot of the rest of the film). And now the poster? Hmmm. It all seems remarkably fishy. If people have already noticed the similarities, why would you then go and create a poster that evokes Drive as well?

Especially disappointing is that the poster for Maniac that I had seen just prior to this one was incredible. 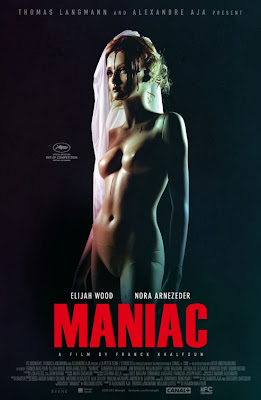 This is actually how it's done, folks. It's thematically relevant, sure, but it is disturbing and inventive and it pulls the unique trick of requiring the viewer to take more than a single look. It's just a shame all the other posters have been so disappointing and in today's case just a bit ridiculous.
Posted by Glenn at 1:16 PM