Can somebody tell me why somebody isn't out there in the Australian film industry trying to adapt some of these plays that companies are bringing to local theatregoers? Maybe it's just because this year has been a rather empty in regards to local films, but I have been infinitely more excited about this trailer for the Sydney Theatre Company's performance of The Maids than any film. I know any film adaptation would struggle to get a cast as amazing as Cate Blanchett, Isabelle Huppert, and Elizabeth Debecki (well, they could certainly get Debecki). The latter's name you may not know, but she was so fabulous as Jordan in Baz Luhrmann's The Great Gatsby that one wishes F Scott Fitzgerald had written more for her to do back in the 1920s (or that Luhrmann had taken a bit of creative license and made her a part of the film's climax in some way).


The play by Jean Genet was adapted once into a film in 1974 with Susannah York and Glenda Jackson, but as far as I am aware it's not very well known and it never received any awards attention so it probably isn't as good as the original material's reputation might suggest. That just makes the prospect of modern day adaptation all the more tantalising of a prospect. And, just by the way, adapting a famous international work whether it be a play or a book would certainly help with getting distributor attention across the globe. America and the UK adapt works from across borders all the time. And, hey, you got Isabelle Huppert to visit Australia to perform in the play, who says she wouldn't be willing to come back for a film version?

This promo trailer for the production (which features a new Australian adaptation, just by the way) is even filmed in a way that could be mistaken for a film trailer. There's certainly moments that look more interested in representing the material in a way that wouldn't possibly have the same effect on stage. The image below is just one instance - although looking at the way the stage is set up, it appears that there is a large screen hovering above the stage that allows the production to do certain things with lighting and staging that a play typically could not. 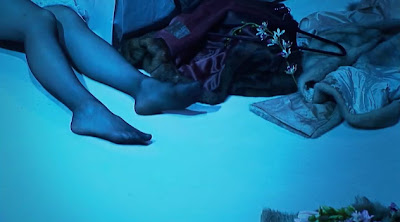 I dunno. I just wish Australian filmmakers were a bit more adventurous with what they choose to bring to the screen. I wasn't the biggest fan in the world, but Unfinished Sky from several years ago, adapted from a 1998 Dutch film, showed a keener awareness than one might initially think. Mostly, of course, I'm just really jealous that people in Sydney get to see this play and I don't, and isn't that what adapting theatre to the screen is all about?
Posted by Glenn at 1:23 PM