I have no genuine opinions of 50 Shades of Gray - I'm neither here nor there about the famous book and its notorious "mommy porn" tag. Don't get me wrong, it sounds like rubbish. Alas, I haven't read the book(s) and have no intention to. The movie adaptation, however, that has been going around in circles of circus sideshows ever since Bret Easton Ellis tried to get on board is another matter altogether. From what I've heard, the book is about a woman taking control of her sex life and pursues sexual desire, which we all know is something that scares Hollywood and filmmakers in general. Remember the hubbub that occurred when Blue Valentine was rated NC17 for (as was widely assumed) a scene of female sexual gratification? Yeah, that. And so much more.

The announcement of a director for the project suddenly took a turn for the curious now that Sam Taylor-Johnson has been hired for the job. Well, according to sources, but it seems fairly reliable. I haven't seen Taylor-Johnson's first feature, the John Lennon biopic Nowhere Boy, but the mere fact that it is a female director has raised my interest in the whole endeavour. It's a rare day indeed when a female director gets given the chance to direct such a high profile project, so there's much to be interested about. I'll be going in blind whenever it finally reaches cinemas (and if it looks even halfway decent enough to warrant a ticket) so I hope she takes the reigns and can make something of it.

However, my biggest interest in the project now spins back to the participation of Bret Easten Ellis. I remember when another controversial novel was adapted for the screen with a female director at the healm and it turned out to be one of the greatest films of the 2000s. That'd be Mary Harron's film version of Ellis' American Psycho. Both books share highly sexualised content and weathered critical storms (albeit at different ends of the spectrum). Of course, 50 Shades of Gray has sold a lot more copies than American Psycho ever did with its brown paper bag covering, but I think the comparison is fare. If Sam Taylor-Johnson is able to turn EL James' book into something tangible then more power to her. Of course, I personally think Ellis' book is excellent so perhaps the material says more to me than it does others. Hollywood has been making a fortune off of turning great literature into bad cinema for decades, is it too much to hope for the reverse once in a while? And, hey, there are ways to turn trite lurid prose into provocative lurid cinema. I'm sure it can be done. I mean, sure, I would be more confident if it were Paul Verhoeven since he has such a great track record with that sort of stuff, but a female director who is married to a man half her age (and who took her name) must be confident and in tune with some sort of sexual level that hopefully she can recreate on screen.

Now, if Taylor-Johnson goes ahead and casts husband Aaron Taylor-Johnson in the lead? That'd be kind of icky. He's a good looking man, but I don't need their sex life portrayed on film, thanks. Can they cast Christian Bale circa 2000 instead? 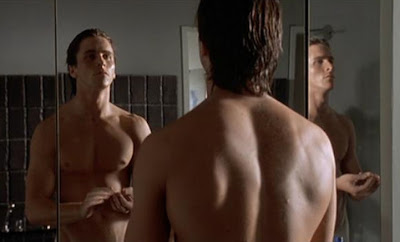