It's been a nearly decade since Greg McLean's Wolf Creek became one of the biggest and most iconic horror films in Australian history. It's re-appropriation of topical mythos and stereotypes into the form of a relatively low scale stalk-and-slash horror film, along with the blood-curdling performance by a resurgent John Jarratt (who, by that stage, had become more Noni Hazelhurst's ex husband and television gardening host and less actor) combined for the rare twofer feat of an Australian film and a horror movie debuting at number one (and an R18+ one at that!) at the box office. 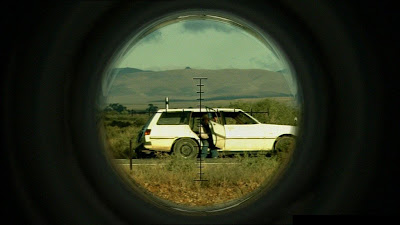 Of course, a lot has changed since then. Nowadays it appears that distributors in Australia have created a brand new release model: the boutique horror business. While the rampaging cult-like success of Cabin in the Woods in a limited arthouse release made distributor Roadshow look temporarily foolish (granted: it was a success that would have been muted in wide release), Sony have now gone and replicated that with their 5-screen release of Evil Dead (which, by the way, I reviewed at Quickflix). Released last weekend in one cinema per state (well, most states anyway - sorry Tasmania), it grossed over $23,000 per screen and entered the box office chart at number 11 with $117,055. Very impressive all this considered, considering a 100-screen release and the marketing that goes with it wouldn't have netted them all that more coins in the bank. Spring Breakers for instance, another R18+ youth-oriented pic, was released on 48 screens and made only $184,445.

These distributors - and believe me, more will follow - have basically found an easy way to toss off those horror titles that they score due to American content deals and once-buzzed acquisitions. The rewards are minimal, but those figures for Evil Dead will certainly come in handy when Sony need to pay for the open bar tab at their national Christmas shindig. They don't even need to bother marketing the product since boffo American returns and general online geek culture mean most people who would want to see it (in one of the five big cities, naturally) are already convinced. Late night "cult" screenings only add to the mystique for some, but that's a cinema's own decision and not on the distributor's dime. It's win win for them, but not audiences, most of who will discover the film on DVD or torrenting. A five screen release all but screams "Yeah, whatever, torrent this for all we care", because they know the die hards and purists will come out anyway. We're uber-fickle.

Which brings me back to Wolf Creek 2. As I mentioned before, it will have been nine years since the original when it comes out in (presumably) 2014 and it will be interesting to see how this develops. Firstly, will McLean lend the film a bigger, more pristine look or will he keep it a mucky, dusty chiller? There will be much pressure on the film, but how will it be sold is one of my biggest question marks. Its local funding and studio support implies it'll be a go-big-or-go-home prospect for its financial backers who will be certainly far more interested in recouping their cash than acquiring any sort of online horror geek cachet. The first poster released - a international sales design for Cannes - looks awfully familiar to that of Evil Dead so maybe they're hoping for a bigger slice of the international pie this time. Especially since horror is such a weird genre for Australian audiences. 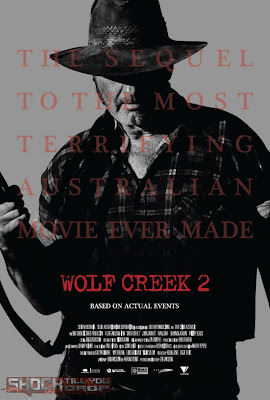 The poster in fact doesn't just look "awfully familiar", but is rather a complete and utter knock off. No ifs or buts about it. It's a sales poster so I guess they're not that fussed, but it's a curiously off tone to begin pitching your project with. Producers better hope that any international film buyers at the festival were able to turn Evil Dead into a smash hit if that's the case. Still, props for putting the country original right there in text. The original film was so very much about the terror of the location as it was about the horror of the situation, so I'm glad they're keeping that element. Who knows where they go from here, but hopefully it's something a bit more original.
Posted by Glenn at 2:48 PM