So, I was listening to the soundtrack of Burlesque. 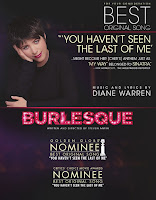 Now, now, settle down, I know you all love that movie, but I'm not here to talk about that. I'm here to talk about Diane Warren! Okay, let's talk about Burlesque just briefly. Will we ever truly forgive the Academy's music branch for snubbing (for once that word is actually accurate here, I believe) "You Haven't Seen the Last of Me"? I mean, I know at the time they were all "wow, that Randy Newman song from Toy Story 3 is so special and unique and such a big, powerful moment in the film! And how about that Dido tune from 127 Hours, am I right?" but I don't know anybody who was even aware those movies had an original song minutes after the credits ended let alone in retrospect. Hum it now, just try. Grrr. Never forget, I tells ya! Never forget!

I'm not much of a fan of Broadway jukebox musicals, those that use a catalogue of pre-existing music to bypass modern audience's finicky nature towards original - why spend $100 on a show when they might not even like the music, when they could spend $100 on a show with songs they already know and love getting performed by trained professionals who probably can't believe they're on a stage singing the soundtrack to Rock of Ages. Oh sure, sometimes they can be entertaining, and I certainly think somebody like Baz Luhrmann can do something really interesting with the concept on screen, but if I was visiting Broadway I'd prefer to take in a show like The Light in the Piazza rather than Jersey Boys or Mamma Mia!, you know?

However, one show I'll be interested to see develop is this Diane Warren one that will be filtering through that songwriter's envious career of pop records and building a story around it. A story that will surely be one of the most adult contemporary things ever put on the stage! Warren isn't exactly a subtle songwriter and she favours songs that build to big, big notes. Can you just imagine tracks like "If I Could Turn Back Time", "I Don't Want to Miss a Thing" and "Nothing's Gonna Stop Us Now" (yes, the Oscar-nominated song from Mannequin). It'll be two and a half hours of non-stop power ballads and good grief what about all of the Celine Dion?!? My gawd, you guys, this production is going to be insane. "You Haven't Seen the Last of Me" is just dying to be the first act closer before intermission, is it not?


Having said that, there are certainly a couple of Warren's more underrated tracks that I hope they can shine a light on. Exposé, one of the best girlgroups from the '80s, had a fabulous track by Warren called "I'll Never Get Over You Getting Over Me" that, I think we can all agree, would certainly look right at home in a playbill. Laura Branigan's "Solitaire" is also an interesting one, as is "The One I Gave My Heart To" by Aaliyah, and "Numb" from the Pet Shop Boys' Fundamental album. They'd certainly be unsurprising song selections from a woman's career that is more heavily associated with Celine, Cher, Leann Rimes and the big cinema ballads that have garnered her six Oscar nominations. This video here of Aaliyah's "The One I Gave My Heart To" actually features Diane Warren herself! That's kinda nifty. Plus, you know, Aaliyah was simply a brilliant performer.


No word yet on whether Cosima DeVito's "Now That You Can't Have Me" will be included, but good grief just picture it. She could certainly use the publicity. To be honest though, I think that's definitely the last we've heard of Cosima.
Posted by Glenn Dunks at 1:31 AM