I'd seen this poster for Mark Hartley's upcoming remake of Patrick some time ago. However, it wasn't until today that I cottoned on to where I'd seen it before, and it wasn't where I expected.

I'd come across this rather lovely poster for the Prom Night remake as I was reading a piece about the best and worst horror remakes to watch on Halloween. I'd obviously seen it back in 2008 when the film was released (to my uproarious howling laughter, might I add), but I'd never really thought of it again until today. As luck would have it, I was soon after reading an email from the Melbourne International Film Festival that included the above key art for Patrick and, voila, a connection was made.

A quick google informs me that nobody else has made the link - why would they? I can't imagine too many inspecting posters for Australian films a year in advance! - but now that I've stared at the two of them for long enough I can't not notice it. Obviously some Photoshop colouring has been done, but look at the lips, the tongue, (especially) the chin, and (especially) the teeth of the face reflected in the eyeball of the Patrick poster, and then look at the same features of the face on the Prom Night design. Same thing. The teeth and the corner of the woman's mouth even begin to fade to darkness at the same point on each design.

I wonder if whoever made the Patrick poster intended people to spot this? I can't imagine it would please them. Or for that matter, the makers of the Prom Night poster, especially if they weren't asked for permission beforehand. Hmmm, right? HMMM! Still, it's not quite as embarrassing as this other piece of Prom Night image shenanigans. Notice this particular DVD cover features an image of star Jamie Lee Curtis, as you would expect given she stars in it. The image, however, isn't from Prom Night, but from Halloween H20, which was released some 20 years later. Well done to whoever made that wise decision. 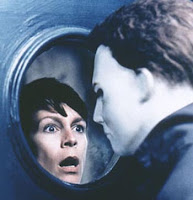 Now, I should add that I don't think whoever made the Patrick poster is "plagiariszing", it just made for a nifty title. Still not sure why they'd use an image from a successful movie like Prom Night (money wise, not critically - obviously), but there you go.
Posted by Glenn Dunks at 1:11 AM

Good post but 'Plaguerising' should be 'Plagiarising'. Unless Hartley's added a zombie plague subplot to the PATRICK remake and you're actually making a clever pun?