1994 turns 18 this year and we're celebrating! I’ve routinely cited this as my favourite year of film – it’s my 1999 if you’re a fan of that other particularly vintage year of the 1990s – and, just to stretch the birthday analogy as far as it can possibly go, I thought I’d investigate the year even further. Invite back old favourites as well as hopefully discover a lot of new ones. Being comprehensive is sexy, isn't it?

What better way to begin a look back at the year 1994 than by looking at the film that not only exemplifies the year, but probably even the decade. Whenever people think of the 1990s in terms of music, fashion, celebrity, attitude, how can anybody go pass Ben Stiller's Reality Bites (with a detour through Empire Records, naturally)? For a decade that by 1999 seemed to have lost all form of personality, it sure did have a new style all of its own for a while. Aided by a hit album of era-defining modern alternative rock and classic hits that seemingly soundtracked an entire generation of collegegoers, costume design that made a beautiful twin to the soundtrack as one character's beer-stained button-up mixed with another character's polka dot vintage, and a cast that would come to represent some of the finest actors of their generation, Reality Bites is probably the most 1990s movie one could think of.

Released just two months before the death of Generation X hero and Nirvana frontman Kurt Cobain in February of 1994, Reality Bites came to be unleashed on audiences at the tail-end of the immensely popular grunge movement at a time when youth were (I presume) desperately trying to carve a new identity. The issues that Stiller's film talks about are hardly defined to people in their early 20s of 1994, but it was surely the earliest noteworthy example of it being done within that very world. Alongside the aforementioned Empire Records and the much less discussed Threesome, Reality Bites' aura of post-college blues clad in plaid and embroidered vests represented a less judgemental, but no less thought-provoking, view of these people who are so frequently (before and since) misrepresented on screen. Like the films of John Hughes and the "Brat Pack" of the 1980s, Reality Bites was speaking to a new generation and doing it with their own language. Even if you didn't identify with any of the five leads, there was still something quite endearing about them that makes the idea of living their lives seem exciting. Even working at The Gap or being unemployed and making meagre scraps playing in a band at a dive bar appears intoxicating. 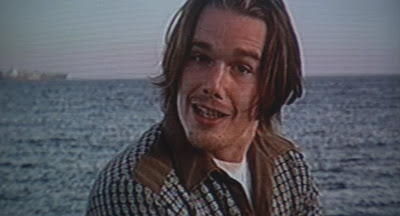 That the film succeeds in spite of several big flaws is probably a credit to Stiller's knack for casting and music. Ethan Hawke's "Troy" is, essentially, a bit of a dick (plus his singing face looks a bit like a donkey having an orgasm to the tune of Collective Soul) and the ending completely sells out Winona Ryder's "Lelaina" in a way that betrays the entire film in a way, but the actors do fine jobs nevertheless. Ryder is especially excellent, free of the period restrictions held on her by her most acclaimed work in The Age of Innocence, Little Women and Dracula or the artificial worlds of Beetlejuice and Edward Scissorhands, she proves to be a sunny, beautiful presence. I can't imagine she's ever looked prettier than she does in her red sleeveless top, tight jeans, sunglasses and her hair cutely cropped above her shoulder. It's my favourite performance of Ryder's and her easiest to love since Heathers. Janeane Garofalo in her assortment of fabulously personal costume changes is a wonder as "Vickie", although the screenplay by Helen Childress all but ignores her in favour of the more generic romance subplot between Troy and Lelaina in the second half, and makes for a wicked double with her performance in Romy and Michelle's High School Reunion. Stiller is also quite fun and even charming despite swimming in his suits and douchey credentials. 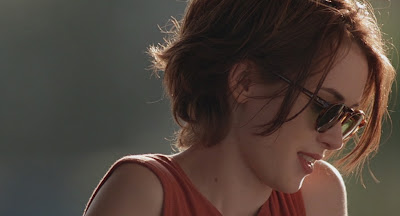 The 1990s, like the 1980s before it, were a significant time in the history of movie soundtracks and Reality Bites is an important milestone in the history of this less acknowledged artform. Quentin Tarantino would get the continual plaudits (and in 1994 he had Pulp Fiction, which got the less modern-leaning music types excited), but Reality Bites was so deliciously of its time that it's hard to ignore it as one of the finest soundtracks of the decade. While not quite wall-to-wall Rage staples like Empire Records, it is chock full of great tunes that epitomise the sound of the '90s. Entertainment Weekly curiously snubbed it from their list of best 1990s soundtracks, but I don't know anybody who could disagree it's incredible. Badass rock outfits fronted by women like the Juliana Hatfield Three and The Indians mix with the rising presence of independent music (Lisa Loeb's "Stay (I Missed You)" was the first song to ever top the Billboard 100 without being signed to a record label) and the oozing cool of Lenny Kravitz, The Posies and Crowded House. Even the somewhat left-of-centre tracks by World Party and Squeeze sit perfectly alongside The Knack's "My Sharona" and Big Mountain's "Baby I Love Your Way". It would probably be classified as too pop these days, but when the charts were being ruled by eurotrance and hip-hop (two genres that had their bona fide hey day at the same moment), it was a blistering alternative that was exciting, easy, and altogether amazing. 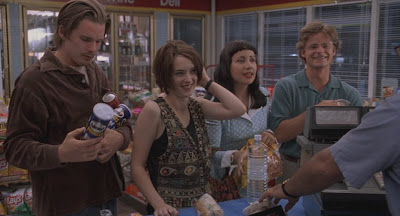 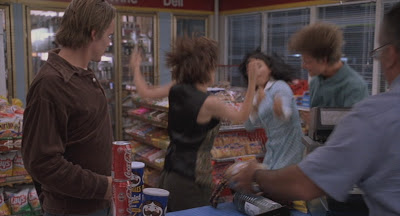 "Evian is naive spelt backwards!" says Vickie during the film's famous "My Sharona" dance sequence, but despite the film being about characters who wish to rebuke the commercialism of their parents, Reality Bites sure is all about what's then and now. Not that there's anything wrong with that since what was "then and now" in 1994 was basically really great and I kinda wish I'd been old enough to live through it. With the era defining allure of a Jack Daniels commercial (am I the only one who remembers those?), Reality Bites is a special little film and one that looks like it should have aged horribly, but hasn't. It's style is so strong that its place as a pop culture time capsule is assured, but it never comes off as capitalising on a rising trend. "You say I talk so all the time... so?" asks Lisa Loeb in the chart-topping hit that still has the power to affect, and isn't that the way? Reality Bites may just be about itself and dawdle about as if caring for little else, but there's nothing wrong with that if you're so taken by it. Even 18 years later the world of Reality Bites is addictive. B
Posted by Glenn Dunks at 10:57 AM