I don't normally dedicate a blog entry to one single link, but I felt this one was so interesting that I had to. I'm sure many of you - well, my Australian readers anyway, the rest of y'all must catch up - are aware of Matt Ravier: noted Sydney-residing cinephile and manager of several film organisations including the Canadian film festival named Possible Worlds (here's a nice interview with the man from 2010 at Trespass Magazine). Canada isn't necessary the first nation from the global filmmaking world that you would think to devote a film festival to, but this year's 7th edition of Possible Worlds shows, I guess, that there's plenty of interesting product from any given country if you're willing to actually seek it out. The festival doesn't come to Melbourne so I can't really talk about the films since so many of these titles won't make their way south of the New South Wales border, but I can only assume that somebody like Matt wouldn't align himself with something of lesser quality.

I bring this up though because in the lead up to the festival in August, Ravier is counting down the Top 100 Canadian Films of the past 30 years. The films of this chilly nation frequently find themselves amongst the Academy's foreign language shortlist - the most recent winner, Les Invasions barbares, was 2004 and most recent nominee, Monsieur Lazhar will see a local release something later this year - but outside of established or up-and-coming directorial talents like David Cronenberg, Sarah Polley and Jean-Marc Vallée, Canada isn't a country many cinephiles tend to take much notice of. When a Canadian film does find its way into public consciousness, like, say, Jason Eisener's Hobo With a Shotgun, I rarely notice much of any significance paid to its history within Canada's film industry. The country appears to hold little cachet amongst movie-lovers, unlike France, Italy or emerging powerhouses in Asia. I'd be surprised if many even knew they were watching a Canadian film half the time, especially these days of national co-productions and when even a Cronenberg film feels less like a grungy homegrown effort and more of a calculated American studio effort.

I've long felt that the Canadian and Australian film industries are all too much alike. We both appear to struggle balancing between a delicate tightrope strung up between two posts - one standing for national identity and patriotism and another that wants to be seen as a major player on the world stage making worthy films that can be seen by foreign viewers as an alternative to Hollywood fare. Occasionally films from both countries emerge on the global market and for but a brief moment shine a much needed light on the industry at large, but rarely for very long. Perusing the list of films from the last few years of both country finds a similar spread of films that run the gamut of ultra-arthouse festival titles to bombastic mainstream titles. Both countries are able to woo more American titles to its shores and, presumably, toot the horn of any international success for a film even somewhat connected to our respective shores. I don't aim to speak for Canada, but it certainly feels like we share much in common as our industries play second, third, or fourth fiddle to America's. I've long held the belief that if Australian films were made in another language they would find far more success here and abroad than they otherwise would. That most of Canada's international successes appear to be those made in the French language is hardly surprising when "foreign language" is such a powerful aphrodisiac for arthouse audiences to want to experience something "exotic". I can only assume that Canadians themselves have furious debates over "what's wrong" with their own industry and can never be pleased. I certainly hope they do because then it means Australians aren't alone in that regard. 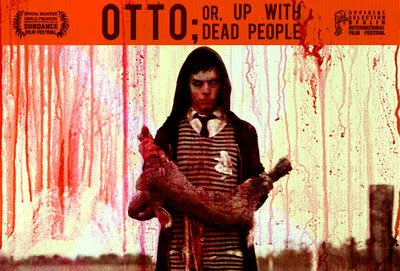 Still, at only four titles in, I am enjoying the countdown immensely and look forward to daily instalments from Ravier. I have only seen one of the featured titles - Bruce LaBruce's gay-rom-zom-gore-com Otto: or Up with Dead People - but has definitely piqued my interest in the others. My knowledge on Canadian cinema isn't particularly stellar, or even "somewhat adequate", but I look forward to Ravier's take on the films of Cronenberg (Videodrome; Naked Lunch), Guy Maddin (My Winnipeg; Dracula: Pages from a Virgin's Diary), Xavier Dolan (I Killed My Mother; Heartbeats), Atom Egoyan (Sweet Hereafter, Exotica), Denys Arcand (Jesus of Montreal), as well as personal favourites that I hope to see included like Yung Chang's Up the Yangtze, Vincenzo Natali's Cube, Léa Pool's Lost and Delirious, Sarah Polley's Away from Her, John Fawcett's Ginger Snaps, Bruce Beresford's Black Robe (an actual Canada/Australia co-production!), and Bruce LaBruce's No Skin Off My Ass. It's a shame a few nods to the country's slasher past like Bob Clark's Black Christmas, J Lee Thompson's Happy Birthday to Me and Roger Spottiswoode's Terror Train are ineligible due to their release dates. Although, hey, Prom Night II: Hello Mary Lou fits the bill! Finger's crossed for Babar: The Movie, too! :/

Maybe my experience with Canadian cinema is so bad that those films aren't even the good ones! If little else, at least the list will be an excellent resource to direct myself to some good films from a country that sadly goes neglected. How can I complain about people not opening themselves up to Australian fare if I don't do it myself for countries in similar situations? Sydneysiders will get to indulge in Possible Worlds in August - until then we get this addictive list.
Posted by Glenn Dunks at 5:28 AM

Otto. I haven't seen that one.

This list looks like it's going to be an interesting read. It's already reminded me to dig out Otto from a box and finally watch it.

It's a pity Possible Worlds doesn't make it down here to Melbourne as we really suffer a lack of Canadian film in the Cinema. I think you're spot on in regard to the foreign language aspect - of the 6 Canadian films I saw in the cinema last year only one was English language.