In Margaret Cho's excellent - and I do mean EXCELLENT - stand up film, I'm the One That I Want, there is a bit where she describes the reaction that TV executives gave her when they saw the size of her Asian face. "I had no idea I was this giant face taking over America. HERE COMES THE FACE!" It's a a very funny moment, but one that is used to describe the awful racism that Cho encountered when embarking on her first network sitcom. Watch the clip below (you can skip to the 5:30ish area or just watch the entire hilarious sequence) and marvel.


Now, tell me you can't see this poster for This Means War and not think of that. I know I sure did! Chris Pine's head is taking over America. HERE COMES CHRIS PINE'S HEAD! If anybody is going to war against that noggin then I feel bad for them (sorry Tom Hardy!) 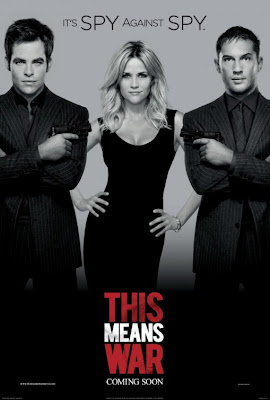 Someone in the comment section at IMP referenced the Dreamworks animated movie from last year, Megamind, and it is one I am inclined to agree with. Look at that thing! It's massive. Also reminds me of the aliens from Mars Attacks with their giant bolbous brains merely replaced by Chris Pine's impressive, but frightening, mop of hair. A google image search shows that his head isn't normally this enlarged, so why is it so here? Is it just the hair or does whoever Photoshopped this poster needs a stern talking too?

Still, it's not like the other two get out of this unscathed. Tom Hardy looks like a stunned mullet with every wrinkle and grizzly texture in his skin erased and buffed back so as to look like an overly manicured suit model. Reese Witherspoon just looks a Madame Tussauds version of herself. Don't get me wrong, she looks stunning, but something's not quite right about her here. Maybe it's just the black and white photography has made her look too much like she's in a Calvin Kline commercial. And then, of course, we get to the strange oddities that are Pine and Hardy's hands. Or should I say, they're not Pine and Hardy's hands at all, but some movie poster stand in's hands who were flipped and reversed and had the celebrity heads stuck on top.

Let's take a closer look at a high-res version of the poster (click to embiggen).

See what I mean! They are the same hand. Every skin crease, hair and vein is the same on one as it is the other. Notice the knuckle on the index finger near the trigger? The shadowing and the hair pattern of the wrist? The two veins that run down the middle, one of which veers away? Yeah, they're the same. That is some lazy poster designing going on right there! I mean, is it so hard to photograph these two men wearing a suit and holding a gun? That appears to be their costume throughout the entire film so it wouldn't take long to do it, which makes this whole debacle even worse. I'm assuming that Hardy is a big bulkier than Pine and that this was a way to counteract that, but it's done in such an obvious way that it stinks of cheese and disappointment. I imagine the film will, too.
Posted by Glenn Dunks at 7:10 PM

Guess you were wrong. The film was pretty cool. And I guess that was done to make it more symmetrical.

@Anon. No. The film was not "pretty cool." It was an abominable POS.