Just last week I purchased Showgirls, Teen Wolves and Astro Zombies by Michael Adams, an Australian film critic to spent 365 days of a given year watching the films deemed by history (and, ya know, fact) to be the worst movies ever made. I haven't finished it yet, but I believe it's meant to 365 films, but I don't know how high he goes.

Surf Nazis Must Die, a 1987 Troma film, does not appear in the book and it only gets a brief passing mention alongside other Troma titles such as Teenage Catgirls in Heat, They Call Me Macho Woman and The Nymphoid Barbarian in Dinosaur Hell. Surf Nazis Must Die is a far better known movie than any of those movies, none of which I had ever heard of before, so it could perhaps be a much better movie than any of those, but I was surprised this notorious flick didn't show up. Not even when Adams discusses the Troma title Bloodsucking Freaks or the blaxploitation genre's take on evil Nazis with The Black Gestapo.

Having come across the film at my local Blockbuster I thought I would give it a go. I also found Bloodsucking Freaks and the first two The Toxic Avenger movies, but having never seen a Troma movie before I thought it best to wade carefully at first. Having been in deep and serious love with the glorious poster artwork (left) for the film for many years I figured "why not?" and decided to make my first Troma experience the one about surfing Nazis having to die. What I got sure was an experience all right. I have to admit that it was somethin'... what that something is, well, I'm not too sure about that. "Fucked up!" keeps popping up in my mind, so let's run with that.

I can truly, honestly and with all sincerity tell you, dear reader, that I didn't have the slightest idea of what the hell was going in in the first 40 minutes of Surf Nazis Must Die. Oh what I could figure out was that there was a pack of roaming neo Nazis patrolling a beach and attacking anyone who went near them. And then they kill a man and steal a woman's handbag? Umm... and then there are SURF NINJAS (actually known in the film as the "Samurai Surfers") who do martial arts AND surfing training in a temple conveniently located right on the beach. There's also a bunch of weird preppy dudes who wear tie dyed Bermuda shorts. Umm... and then... umm... oh! There's a big black woman who lives in a retirement home and she's insane or something? I think it was set in the future, too. The two leaders of the gang appear to be played by actors that resemble Zorro and Mickey Rourke's in between years respectively. 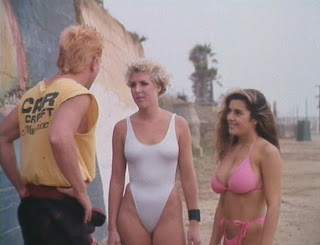 Gnarly! Don't you love how movies made in the 1980s yet set in the future still always looks like the 1980s?
Eventually Momma decides to take revenge of the Surf Nazis for murdering her son (sure, why not) and it was at this stage that the movie started to get interesting. Well, "interesting" is probably not the best word to use here, but it certainly got perkier. Bobbie Bresee shows up briefly, too, and she's actually kinda hilarious (in a deliberate way, I suspect) as the mother of one of the Surf Nazis, Smeg. She seems strangely reserved in her horror that her son is a member of a notorious gang who wear swastikas and appear on the news nightly in reports of gang violence. Whatever works for her, I guess. There is a Surf Nazi vs Surf Ninja fight that is boring so that was disappointing.

The last 15 minutes of the film (albeit of an 80 minute movie) is devoted to Momma hunting down and killing off the evil Surf Nazis. It's surprisingly entertaining if you ask me and as far as exploitation films go it's some of the better silliness that I've seen. Gail Neely, in only her second ever film performance, clearly cannot act (just like everyone else here), but therein lies part of the fun. Watching her over-the-top performance as this mad, vengeful big momma is a hoot. I guffawed as I watched her jump up and down in her commandeered speedboat as she cheers about decapitating the sexy Surf Nazi and I very nearly spit out my drink when the film first shows her laughing maniacally behind the wheel of a motorbike. I don't want to ask why the Surf Nazis thought it would be easier to escape by stealing surf boards and paddling out to sea rather than just stealing the car they took the surf boards from, but I won't. It's ridiculous, obvious, but enjoyable. Neely would go on to have a 2 episode stint on LA Law as "Bailiff", play Winnie Mandela in The Naked Gun 2½: The Smell of Fear as well as a role in the awfully titled Twogether, whatever that is.

What I'd like to know is who the director is. The film's credits and IMDb list a man called "Peter George", but other places cite "Kyle Sutherland". That's a very weird discrepancy if you ask me. On one last positive note, I did like the very '80s music by Jon McCallum. A soundtrack was never released, but I happened upon a bootleg copy so that's kinda awesome! As my first ever trip to Troma HQ, I am mostly unimpressed. It's a shame that the first hour of this nonsense is so mind-numbingly awful because the end was a hoot. D-

Me before watching Surf Nazi's Must Die! 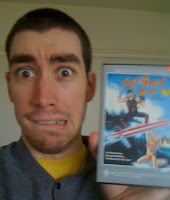 Me after watching Surf Nazi's Must Die!

What does Momma have to say about all this? 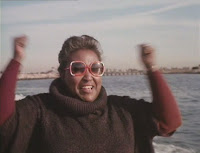