As you may have noticed I have been watching a lot of 1980s horror flicks over the past week as I sit here waiting for this flu to go away. Last night I watched A Nightmare on Elm Street 5: The Dream Child, which I had seen a very long time ago, but didn't remember anything from. It was not good. Where Elm Street 4 still had some creativity and horror spectacle, number 5 was just bland and far too formulaic even for this franchise!

However, the worst bit of all came about after I had finished watching the movie and was navigating the special features. There was a definite phase in the late 1980s and early 1990s for movies to release novelty rap songs for their soundtrack - personally, I get a kick out of "Turtle Power" by Partners in Kryme from the Teenage Mutant Ninja Turtles soundtrack, actually - performed by artists that pop culture has not been kind to. Apparently the song "Are You Ready for Freddy" by The Fat Boys (because, as far as I can tell, they were fat) was used as the theme for A Nightmare on Elm Street 4: The Dream Master, but I do not remember it at all from that film and it appears on the disc for The Dream Child so I'm not really sure what to think other than it is awful and, surely, the moment the Freddy Krueger brand "jumped the shark" as they say.

The song features a video clip that involves The Fat Kids moving into Freddy's house to inherit a bunch of money and then Freddy shows up and chases them around a bit while performing a rap. Yes, Freddy Krueger raps. It's horrible. 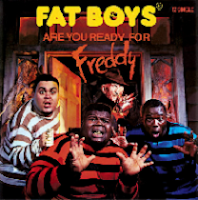 Thrillin'!
Young ones, old ones, yo' mommas, too.
And if you don't watch out, I'm gonna thrill you, too!
So my advice to you is to stay ready.
'Cause you know whos back?
Freddy!
You see my name is Freddy, and I'm here to say.
I'll wrap you up and take you away.
And if you feel like your tired, and ready for bed.
Don't fall asleep, of you'll wake up dead!