The Twilight "Saga" Must Be Stopped! 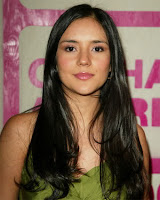 They keep taking interesting actors! The list continues to grow with the likes of Dakota Fanning, Bryce Dallas Howard, Xavier Samuel, Nikki Reed and now - perhaps most frightening of all - the so-called "Twilight Saga" has managed to rope in an Academy Award-nominated actress in the form of Catalina Sandino Moreno! Moreno, as you may recall, was nominated for her work in Maria Full of Grace a few years ago.

Now, Moreno hasn't exactly been rivalling some others in Hollywood and churning out five movies a year, but she's accrued a small and steady career out of movies such as Paris je t'aime, Che and Fast Food Nation in which she had by far the best storyline. That she's had to resort to appearing in Eclipse is a sad sign of the way actors of colour must go about earning their rent. Will she be playing a Hispanic character though? I can't imagine the northern states of America have too many people of Colombian descent. Or will they pretend she's Native American and accept that nobody will notice?

Please forgive my ignorance if I misused the word "Hispanic".
Posted by Glenn Dunks at 3:07 AM

Email ThisBlogThis!Share to TwitterShare to FacebookShare to Pinterest
Labels: The Twilight Saga Makes Me LOL

While I'm sad that she has to appear in something like Eclipse, I'd hardly call it the most embarrassing way an actor has ever earned a paycheck. It's not like she's Ben Kingsley slumming it in an Uwe Boll movie. And maybe, just maybe, a role in a high profile movie like this will give her the opportunity to branch out in better movies that are worthy of her talent.

Yeah, kinda like Anton Yelchin. Not all his movies can give us the amount of talent and promise he showed in Fierce People. Sometimes, you just gotta bite the bullet and get the paycheck. That said, it doesn't mean you can completely let yourself go (sadly, I'm looking at you Meryl). And I mean, like James says: the extra exposure certainly can't hurt her.