The finest actor of the naughts and already one of the greats (even if it's going to take some people a few decades to realise it), Nicole Kidman looks set to begin the next decade in a blaze of glory. From the Film Experience comes this (what I assume is new) image from Rabbit Hole. It will be the first film of hers in the new decade when it gets released next year and I don't think she could start it any better. Of course, it could turn out to be a Proof-style Broadway-to-Hollywood version of the play that won Cynthia Nixon a Tony Award, but with the talent involved? I hope not. 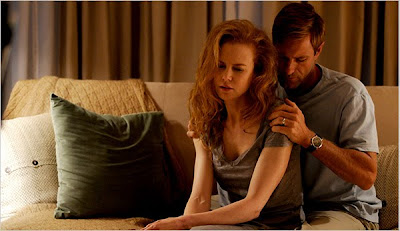 Directed by John Cameron Mitchell (currently batting 2 for 2 after Hedwig and the Angry Itch and Shortbus) and co-starring Aaron Eckhart, Dianne Weist, Sandra Oh and Jon Tenney I was excited about it from the moment Kidman signed on. As Nathaniel points out one of her very best films is Birth, a movie that shares a few similarities with Rabbit Hole.

I also hope and hope and HOPE that The Danish Girl gets made. The film in which Kidman is set to play the transsexual lover of Charlize Theron is bound to be controversial and to push buttons and certain to incite massively differing opinions whilst bringing out the Kidman haters. Thankfully, it is generally my experience that if any combination of those things happen then the movie is inevitably brilliant (see: Birth, Dogville, Margot at the Wedding).

And how great is it to see the red hair back? Not sure why she ever got rid of it to be honest. Why get rid of one of your defining characteristics? There is a quote in this New York Times article from Eckhart that goes like this: "The reason why I’m in the movie is Nicole. If she wants to work with somebody, then that’s what happens." That quote gives me comfort. A lot of people may rag on Kidman for being "cold" or for "using too much botox" or for appearing in "flops" as if she's the first star to do so, but I like knowing that the important people realise her talent. What actor this decade has had as many films still ripe for discussion now as they were at the time? Not many I reckon. And they will continue to do so for a very long time.

May she reign for another decade before she retires and raises kangaroos on her Nashville estate and appearing at sporadic film premieres wearing really big hats.
Posted by Glenn Dunks at 9:00 AM

Thank you! And isn't it also mighty wonderful that she has a hand in bringing this project to the screen as a producer? And look at the people she sought out to work with. I love this woman's work and I am looking forward to Rabbit Hole and whatever else her production company will bring out.

Every single film starring Nicole Kidman is an event film for me.
I cannot wait to watch Nine and the Rabbit Hole.
I am dying of thirst from Nicole-withdrawal.

Just about a thought about those 'flops' - what I love about Nicole is the variety of films she commits to and the parts she plays. She doesn't stick to a niche and she really is a great performer, very serious about her work and quite talented - I was lucky to be on set for most of the shooting of this film.

Nicole Kidman is one of the few movie stars who's also an artist--what other A-list actress would star in movies like Dogville, Birth, or Margot at the Wedding?
Even though these films may have flopped, so to speak, they're still among the most interesting and enigmatic films of the decade. People will still be talking about them for years to come.

yeah, i'm excited for this...confused by the "proof" comment though...that was a very good film. perhaps overlooked, but very solid.

I am glad to see they are still smart people left on this planet.Nicole is truly one of the best and most versatile actresses ever and I enjoyed every single movie starring Nicole.That is why I am sure I am gonna love Rabbit Hole and any other movie she makes.Nic,you are great!

Kidman's 'flops' are more interesting than most other performers 'hits.'
'Birth' is a great film despite its financial bottom line and that long close-up in the opera house is mind-blowing!